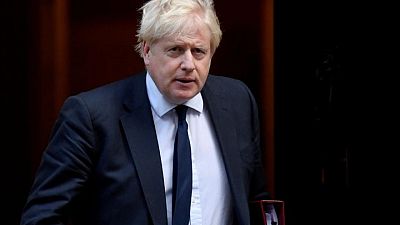 <div> <p><span class="caps">LONDON</span> – British employers told Prime Minister Boris Johnson’s government on Friday to “get serious” about encouraging business investment and stop blaming them for the economy’s problems and hitting them with higher taxes.</p> <p>The Confederation of British Industry urged finance minister Rishi Sunak not to increase the tax burden for companies again when he delivers a budget statement and a three-year public spending plan next week.</p> <p><span class="caps">CBI</span> Director-General Tony Danker said Sunak’s announcement on Wednesday would be a “defining moment” for Johnson’s administration as it tries to move beyond the coronavirus pandemic and build a post-Brexit economy. </p> <p>“We cannot take the economic recovery for granted,” Danker said. “If the UK is to break out of a decade-plus cycle of anaemic growth and zero productivity, then the government has to get serious about what it will actually take to deliver that.”</p> <p>This month, Johnson vowed to end “the old failed model of low wages, low skills, supported by uncontrolled immigration,” comments which angered many business leaders who were already smarting from a planned increase in corporation tax in 2023.</p> <p>Relations between Johnson and business leaders have been tense since he led the campaign in favour of leaving the European Union in 2016 when he dismissed their concerns about the impact on the economy.</p> <p>Danker said there were rumours that Sunak might announce more new taxes for business as he comes under pressure from other ministers to provide more cash for their departments.</p> <p>“There is a fundamental inconsistency where the government wants to unlock business investment, but its tax policies do the opposite,” he said. “You cannot will the ends and ignore the means to turbocharge the economy.”</p> <p>Danker also took a swipe at Johnson’s promise to “level up” Britain’s poorer regions which has so far been short on detail.</p> <p>“Rather than a levelling up plan that builds more tennis courts, let’s have one that regenerates Britain’s high streets and industrial heartlands,” the <span class="caps">CBI</span> boss said.</p> <p>As well as ruling out new taxes, the <span class="caps">CBI</span> urged Sunak to extend his incentive for business investment beyond 2023, overhaul a property levy to encourage investment in energy efficiency and require regulators to prioritise investment. </p> <p/> </div>