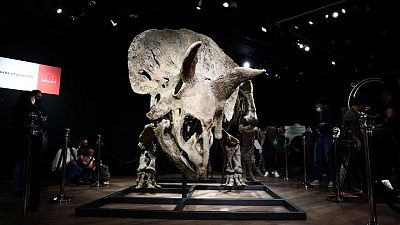 <div> <p>By Michaela Cabrera and Ingrid Melander</p> <p><span class="caps">PARIS</span> -A private, anonymous U.S. collector bought the fossilised remains of ‘Big John’, the largest triceratops dinosaur ever discovered by paleontologists, for 6.65 million euros ($7.74 million) at a Paris auction on Thursday.</p> <p>Big John – named after the owner of the land where the dinosaur’s bones were found – roamed modern-day South Dakota more than 66 million years ago. </p> <p>“It’s being acquired by an American collector, and that individual is absolutely thrilled with the idea of being able to bring a piece like this to his personal use,” said Djuan Rivers, a representative for the buyer.</p> <p>The first piece of bone from the supersized skeleton – the skull alone is 2.62 meters long and two meters wide – was found in 2014.</p> <p>By 2015, paleontologists had unearthed 60% of the skeleton, a rare feat, made of over 200 pieces which were painstakingly put together in Italy, to prepare for the Paris auction.</p> <p>The skull showed a traumatic lesion, which researchers said was likely the work of another triceratops striking it from behind.</p> <p>“The history behind this and the curation of it is absolutely impressive, so to be able to be a part of preserving something of this nature that was actually found in the U.S., in South Dakota, is also something extremely special,” Rivers said.</p> <p>The name triceratops means “three-horned face”. </p> <p>The hammer price at the Drouot auction house, before commission and other costs, was 5.5 million euros. Drouot had estimated the skeleton would fetch between 1.2-1.5 million euros. It sold to an unidentified private U.S. buyer.</p> <p>“It’s a record for Europe,” said auctioneer Alexandre Giquello, who described exponential growth in the relatively new market of dinosaur fossils. “We’re creating a market.”</p> <p>Auction house Christie’s sold a Tyrannosaurus rex skeleton for $31.8 million in New York last year.</p> <p>($1 = 0.8589 euros)</p> </div>