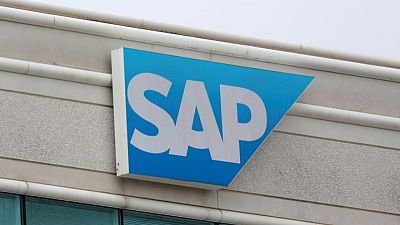 <div> <p>By Nadine Schimroszik and Supantha Mukherjee</p> <p><span class="caps">BERLIN</span> -<span class="caps">SAP</span> said on Thursday demand for its cloud business database was growing as the German business software group confirmed its preliminary third-quarter results and full-year guidance boosted by big returns from its ties to a venture capital firm.</p> <p>Last week, the company had forecast cloud revenue to grow by 16%-19% in the year as a whole, helping its overall cloud and software revenue to increase by 2%-4%.</p> <p>Cloud backlog for flagship database S/4HANA was up 58% at constant currencies and current cloud backlog – a measure of incoming business – grew 22% in the third quarter.</p> <p>“Our cloud revenue now represents 35% of our total revenue and that’s driving up our share of more predictable revenue, which rose by 3 percentage points year over year to 77%,” Chief Financial Officer Luka Mucic said on a call with journalists.</p> <p>Shares of the software maker, however, fell 3.4% to the bottom of Frankfurt’s blue-chip index after traders pointed to Mucic confirming the group’s forecast for flat or slightly lower 2022 profits in a separate call with analysts.</p> <p>“If the market was thinking this was going to be the EU tech play for 2022, they may now have other ideas,” a trader said.</p> <p><span class="caps">SAP</span> still raised its forecast for cloud and software revenue for the full year by 200 million euros ($232 million) to 23.8 billion-24.2 billion euros.</p> <p>Adjusted revenue rose 5% to 6.68 billion euros ($7.70 billion) for the third quarter ended Sept. 30, and adjusted earnings per share rose 2% to 1.74 euros.</p> <p>Quarterly results were also lifted by the company’s venture capital arm, Sapphire Ventures, which accounted for a quarter of <span class="caps">SAP</span>’s more than 2 billion-euro profit in the third quarter, underscoring the fund’s recent success in backing small tech startups.</p> <p>The VC firm, spun out of <span class="caps">SAP</span> in 2011, has backed high-profile startups such as Square, Box, Fitbit and Wise.</p> <p>Some analysts say they do not take into account in their forecasts the fund’s performance, preferring to focus on the more predictable results of its cloud offering.</p> <p>But year-to-date the business has contributed about 1.8 billion euros to earnings, up by 1 billion year-on-year, Mucic said on the call with journalists.</p> <p>“Our typical check size is $10 to $60 million, but we can go all the way up to $100 million,” Andreas Weiskam, co-founder and partner of Sapphire Ventures, said in an interview with Reuters.</p> <p>Weiskam said the fund’s assets under management currently stands at more than $6.8 billion. <span class="caps">SAP</span> had committed $1.75 billion last quarter.</p> <p>“Sapphire Ventures gives <span class="caps">SAP</span> tail wind. But it also means volatility – depending on the capital markets,” said Knut Woller at brokerage Baader Helvea.</p> <p>($1 = 0.8581 euro)</p> </div>