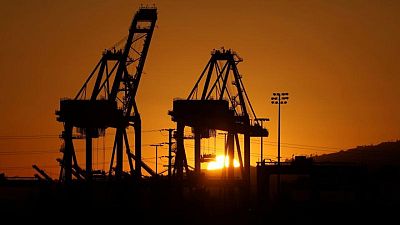 <div> <p>By Jonathan Saul</p> <p><span class="caps">LONDON</span> – The world faces “very prolonged” disruptions to shipping cargo flows, an executive at leading ports operator <span class="caps">ICTSI</span> said, as logistical headaches such as truck shortages weigh on backed-up supply chains and rebounding trade drives up volume.</p> <p>Major bottlenecks have formed across the globe in recent months due to a surge in demand for retail goods from people stuck at home under pandemic-related lockdowns and logjams impacting the supply of container ships and boxes to transport cargo.</p> <p>The situation has been particularly severe in major retail markets such as the United States, where dozens of vessels remain stuck off the West Coast ports of Los Angeles and Long Beach, unable to discharge. </p> <p>“I see this as a very prolonged crisis at least on the port and land side, particularly in places like the U.S. It’s going to be tough,” said Christian Gonzalez, head of corporate with Philippines-headquartered International Container Terminal Services (<span class="caps">ICTSI</span>).</p> <p>“From a transpacific point of view, it’s going to be quite messy for some time, and it is not something that can be solved by adding more ships into the system. That is going to create a bigger backlog.” </p> <p>Gonzalez said ports everywhere were feeling the strain of such huge demand to process cargo. He added that traditional peak season flows ahead of Christmas had also been impacted.</p> <p>The buoyant cargo activity was also impacting other regions including Iraq, Gonzales said, where <span class="caps">ICTSI</span> operates the Basra Gateway Terminal in the south of the country.</p> <p>International shipping lines were deploying containers on bigger volume routes which have seen record high freight rates in recent months, he said.</p> <p>“There is quite a bit of disruption in Iraq, mostly because of container shortages and people just not wanting to send containers on those routes,” he said. </p> <p>Gonzalez said he was “bullish” about prospects for 2022 for the company’s portfolio, with cargo volumes expected to remain firm.</p> <p><span class="caps">ICTSI</span>, which has container ports in a number of regions including Asia, the Middle East and South America and is among the world’s top 10 container terminal operators, handled consolidated volume of 5.45 million <span class="caps">TEU</span>s (twenty-foot equivalent units) in the first half of 2021. </p> <p>That was 14% higher than the 4.79 million <span class="caps">TEU</span>s handled in the same period of 2020. </p> <p/> </div>