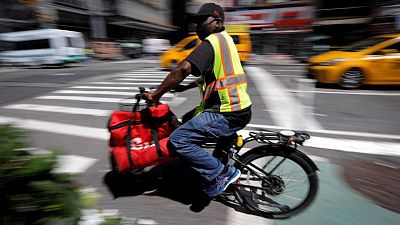 <div> <p>By Toby Sterling</p> <p><span class="caps">AMSTERDAM</span> – The chief executive of Just Eat Takeaway.com said on Thursday he expects newly acquired Grubhub to eventually be part of a consolidation in the U.S. delivery market, but signalled he is not currently open to selling the business. </p> <p>“Over time there will inevitably be consolidation in the wider U.S. on-demand delivery market, as various players combine to optimise the last mile,” Jitse Groen told investors in a livestreamed presentation.</p> <p>Company management “expects Grubhub to be involved in this consolidation when it comes and intends to do so from a position of strength”.</p> <p>Asked whether he would consider selling or combining the whole of Grubhub’s business, which Takeaway bought for $7.3 billion in June, Groen demurred. </p> <p>“Grubhub is fresh,” he said, but added that “anything that makes Grubhub a stronger player – we’ll look at it”.</p> <p>Takeaway’s shares are down 25% so far this year, in part due to the company losing market share in U.S. suburbs and after New York City, its biggest and strongest market, imposed a cap on the commission food-delivery companies can charge restaurants.</p> <p>Investors have called on the company to address its competitive position in the United States – where Grubhub is pitted against Uber Eats and DoorDash among others – including by considering selling parts of its operations. They also want Takeaway to clarify its strategy on grocery delivery, where it competes strongly with Amazon-backed Deliveroo in Europe.</p> <p>In a presentation, Takeaway it said it would target Gross Transaction Value growth – a common measure in e-commerce – in the “mid teens” for 2022.</p> <p>The company repeated its full-year 2021 forecast for an earnings before interest, tax, depreciation and amortisation (<span class="caps">EBITDA</span>) margin of <del>1%-1.5% on a gross transaction value of 28 billion-30 billion euros ($32 billion</del>$35 billion). That translates to an <span class="caps">EBITDA</span> loss of 280 million-380 million euros.</p> <p>For 2022, the company told investors to expect the negative margin to improve to -0.6% to -0.8%, and that it expects a positive margin in “long term” as <span class="caps">GTV</span> doubles over the next five years.</p> <p>Bernstein analysts, who rate Takeaway shares “Outperform”, said in a note that the 2022 guidance was lower than expected but “we remain positive about the position of Takeaway in its core markets.”</p> <p>Shares recovered some of their early losses after Groen’s remarks and were trading down 0.6% at 71.36 euros at 1253GMT.</p> <p/> </div>