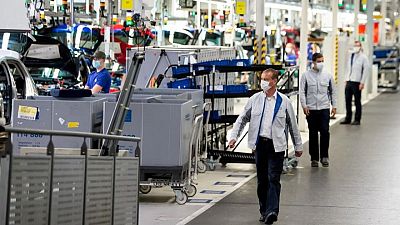 <div> <p>By Ben Klayman</p> <p><span class="caps">DETROIT</span> -Volkswagen AG’s top Americas executive said on Tuesday the global semiconductor chip shortage will run well into next year.</p> <p>“Without a doubt, this shortage is going to go well into 2022, at least the second half of ’22,” Volkswagen Group of America Chief Executive Scott Keogh said at the Reuters Events Automotive Summit.</p> <p>The shortage of chips has led automakers around the world to curtail vehicle production, but also driven up profit as vehicle prices have risen. Carmakers use chips in everything from brake sensors to power steering to entertainment systems.</p> <p>Keogh added that while the issue may ease in the fourth quarter of this year, the industry still cannot meet market demand for vehicles.</p> <p>He said one likely shift in the near future is that automakers will try to reduce the number of chips needed in each part of the cars and trucks. </p> <p>“Historically, we’ve made decision as if chips were nearly infinite, so each and every module required a chip, every window lift, every modulator,” he said. “There’s ways that we start to look at it when we develop the cars, can we do more modules with less chips? It can be done. These are all things we are looking at.”</p> <p>As for talk that the U.S. government should simply fund the building of additional chip plants, Keogh said it will take billions of dollars and at least four years to do that. “I don’t know if picking up a phone to the government is the solution on the chip shortage.”</p> <p>While chips are the current challenge, the next will be the growing demand for electric vehicles and the batteries needed to power them, Keogh said. </p> <p>While VW’s plant in Chattanooga, Tennessee, will obtain its batteries from SK Innovation’s Georgia plant, the German automaker will have additional announcements regarding batteries when it starts rolling out the next wave of EVs, he said.</p> </div>