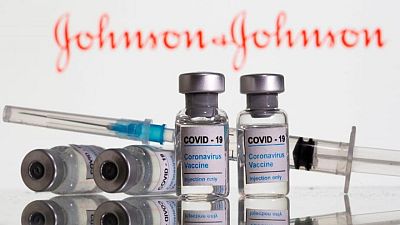 <div> <p>By Manas Mishra and Carl O’Donnell</p> <p> <del>Johnson & Johnson on Tuesday reported lower-than</del> expected quarterly revenue after sales of its <span class="caps">COVID</span>-19 vaccine missed Wall Street estimates following a string of production setbacks. </p> <p>The New Brunswick, New Jersey-based company maintained its 2021 sales goal of $2.5 billion from the vaccine, and said it recorded $766 million in sales of the shot in the first nine months of 2021 – which indicates that sales will have to more than triple in the fourth quarter to meet its forecast. </p> <p>“We’re still very much committed to the $2.5 billion of revenue and the supply that is correlated to that,” Chief Financial Officer Joseph Wolk told investors on a conference call.</p> <p>The drugmaker earlier this year experienced quality problems at a Baltimore manufacturing facility that produces the single-dose vaccine, resulting in wastage of millions of doses.</p> <p>The J&J shot, once touted an as important tool for vaccinating hard-to-reach areas, is behind its schedule for deliveries in the United States and Europe.</p> <p>The vaccine has the lowest uptake in the United States at a time when rivals Moderna Inc and Pfizer are signing up supply deals for booster doses in 2022 and beyond. </p> <p>“It’s hard to say if J&J will meet that target or not, but with the booster guidance coming out soon, that could provide a boost to the fourth quarter,” Edwards Jones analyst Ashtyn Evans told Reuters. </p> <p>The U.S. Food and Drug Administration (<span class="caps">FDA</span>) has yet to authorize a booster dose of the J&J vaccine, with a decision expected in the coming days. </p> <p>J&J’s shares rose nearly 2% in morning trade, reversing a premarket fall, as the company raised its overall adjusted profit forecast and beat earnings estimates. </p> <p>Sales in its medical devices unit rose 8% to $6.64 billion but missed analyst estimates of $6.87 billion, hurt by a resurgence in <span class="caps">COVID</span>-19 cases due to the Delta variant. </p> <p>Excluding items, J&J earned $2.60 per share, beating expectations of $2.35 per share, according to Refinitv data. </p> <p>J&J lifted its 2021 forecast for adjusted earnings per share to between $9.77 and $9.82, from its prior estimates of $9.60 to $9.70. </p> <p>Overall sales of $23.34 billion missed expectations of $23.72 billion. </p> <p><span class="caps">COVID</span>-19 vaccine sales of $502 million missed estimates of $815 million, according to FactSet.</p> </div>