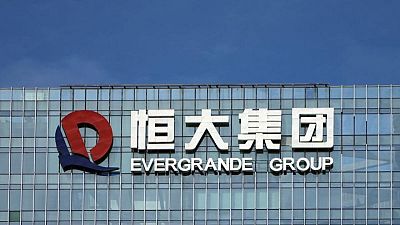 <div> <p>By Clare Jim, Julie Zhu and Samuel Shen</p> <p><span class="caps">HONG</span> <span class="caps">KONG</span>/SHANGHAI -China Evergrande Group’s deal to sell a 51% stake in its property services unit has been put on hold, two people with knowledge of the matter said, in a blow to the embattled developer’s hopes of avoiding a potentially disruptive default.</p> <p>Evergrande, teetering on the brink of collapse with more than $300 billion in debt, was in talks to sell the stake in Evergrande Property Services to smaller rival Hopson Development Holdings for around HK$20 billion ($2.6 billion), sources previously told Reuters.</p> <p>However, the deal, which was set to be the biggest asset sale for the company, has been put on hold as it has yet to win the blessing of the Guangdong provincial government, which is overseeing Evergrande’s restructuring, one of the people said on Tuesday. </p> <p>When contacted, a Hopson representative asked Reuters to await an announcement. Evergrande and the Guangdong provincial government did not immediately respond to Reuters requests for comment. </p> <p>Evergrande is scrambling to raise funds to pay its many lenders and suppliers, amid concerns about a possible offshore default later this week after it missed a series of interest payments due on its bonds. </p> <p>However, Hengda Real Estate Group Co, Evergrande’s flagship unit, has remitted funds to pay an onshore bond coupon of 121.8 million yuan ($19 million) due on Tuesday, four people with knowledge of the matter said.</p> <p>One of the people said Evergrande, China’s No. 2 developer, needs to prioritise its limited funds towards the domestic market where the stakes are much higher for the country’s financial system.</p> <p>While, it was not immediately clear why the Guangdong provincial government has not approved the Evergrande Property Services transaction, some of Evergrande’s offshore creditors had also opposed the deal, the person added.</p> <p>Another source said the announcement of the deal will be delayed, pending China’s regulatory approval. The deal has already won Hong Kong Stock Exchange’s special approval, he added.</p> <p>Reuters reported last week Chinese state-owned Yuexiu Property had pulled out of a proposed $1.7 billion deal to buy Evergrande’s Hong Kong headquarters building over worries about the developer’s dire financial situation. </p> <p>A source said the company had also received guidance from the municipal government of the southern city of Guangzhou to put the purchase on hold at the end of August.</p> <p><span class="caps">MARKETS</span> <span class="caps">ROILED</span></p> <p>The liquidity crisis at Evergrande has roiled global markets. High-yield bonds issued by Chinese property developers have been hit especially hard.</p> <p>An Evergrande bond due March 23, 2022 will officially be in default if the company does not make good after a 30-day grace period for a missed coupon payment that had been due on Sept. 23.</p> <p>But the wider offshore bond market has responded positively after assuring comments from China central bank’s and coupon payments by two other major developers.</p> <p>An index of China high-yield debt, which is dominated by property developer issuers, has seen spreads tighten from last week’s record levels to around 1,484 points on Tuesday.</p> <p>Sunac China, which has a $27.14 million payment due Tuesday, has paid its bondholders, a source with direct knowledge of the matter said. </p> <p>The source was not authorised to speak to media and declined to be identified. A Sunac representative declined to comment.</p> <p>Kaisa Group said on Monday it had paid a coupon due Oct. 16 and it plans to transfer funds for a coupon worth $35.85 million due Oct. 22 on Thursday.</p> <p>In the past few days, the People’s Bank of China has said spillover effects on the banking system from Evergrande’s debt problems were controllable and that China’s economy was “doing well”.</p> <p>Bonds from Chinese developers that gained on Tuesday included Modern Land’s 2022 bonds which bounced over 8% to 40.250 cents on the dollar, while Central China Real Estate’s 2024 bonds climbed over 5% to 44.843 cents.</p> <p>On Monday, smaller developer Sinic Holdings defaulted on $246 million in bonds as expected. It had warned of the default last week, saying it did not have sufficient financial resources.</p> </div>