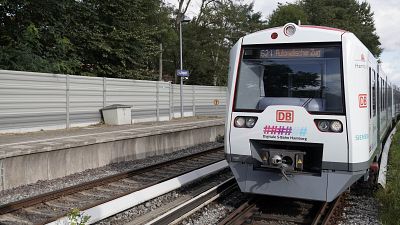 A driverless train made its first trips in Hamburg last week in a "world first" for a technology which should improve its citizens' movement around the city.

Beginning in December, four autonomous trains created by Siemens and Deutsche Bahn will enter service in the northern German port city as part of a €60 million modernisation project for its S-Bahn urban rail system.

"Deutsche Bahn and Siemens have developed the world's first train that runs by itself," the two groups said in a statement.

The technology does not require a specific track as the autonomous train runs on the same network as those operated by drivers.

If passengers are on board, a railway operator will remain in the driver's cabin for safety reasons. But the train is capable of performing its own manoeuvres, for example in depots.

The automation technology, which is based on a European digital communication protocol, should make it possible to transport "up to 30 per cent more passengers" while also "improving punctuality and reducing energy consumption by 30 per cent,” Roland Busch, head of Siemens, said.

"The technology is already approved," he added.

For Deutsche Bahn, automation should allow for a "better offer without having to build a kilometre of new track", its director Richard Lutz said.In France, the SNCF is working with partners including Alstom, Bosch and Thales, to "run a fully autonomous prototype in 2023".

During a test at the end of 2020, a locomotive ran semi-autonomously for the first time on the French national network.