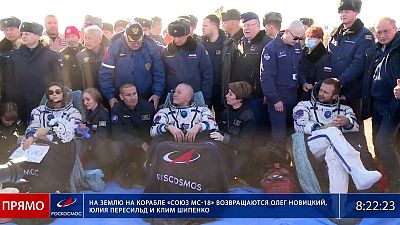 Two Russian filmmakers and a cosmonaut landed back on Earth after traveling to the International Space Station to shoot a movie.

The Soyuz space capsule landed on schedule in Kazakhstan on Sunday with Yulia Peresild, Klim Shipenko, and Oleg Novitskiy aboard.

The capsule descended with a red-and-white striped parachute after entering Earth’s atmosphere.

After the landing, all three appeared healthy.

“I’m feeling a bit sad today. It seemed that 12 days would be a lot, but I did not want to leave when everything was over,” Peresild said on state TV.