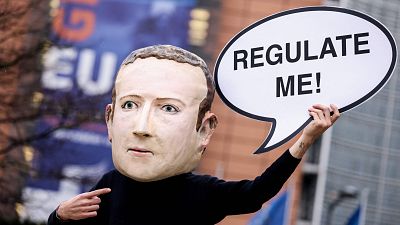 Activists called for the EU to regulate Facebook during a demonstration in December last year   -   Copyright  Kenzo TRIBOUILLARD / AFP   -
By Euronews  with Reuters  •  Updated: 05/10/2021

Two members of the European parliament have called for an investigation into allegations by a whistleblower that Facebook prioritised profits above the public good.

In a statement released on Monday, the EU parliamentarians said they had been in contact with Haugen, who is due to appear before a US Senate committee on Tuesday.

"The Facebook Files – and the revelations that the whistleblower has presented to us – underscores just how important it is that we do not let the large tech companies regulate themselves. They are simply not capable of lifting that responsibility," said Danish Social Democrat MEP Christel Schaldemose.

Schaldemose is the lead rapporteur for the Digital Services Act, announced by the European Commission in December last year, that could see tech companies handed fines if they don't act to stop users' unlawful behaviour.

It is naïve to appeal to corporate self-regulation and responsibility.

The DSA would also oblige online platforms - like Facebook - to be more transparent about the algorithms they use and to "prevent abuse of their systems" by allowing independent audits.

"The documents finally put all the facts on the table to allow us to adopt a stronger Digital Services Act," Alexandra Geese, a German Green MEP involved in negotiations over the content of the Act, said.

"We need to regulate the whole system and the business model that favours disinformation and violence over factual content – and enables its rapid dissemination," she said.

Responding to the calls for social media regulation, a Facebook spokesperson said, "every day, we make difficult decisions on where to draw lines between free expression and harmful speech, privacy, security, and other issues".

"But we should not be making these decisions on our own... we've been advocating for updated regulations where democratic governments set industry standards to which we can all adhere".

However, US senator Richard Blumenthal said the leaked research showed that Facebook prioritised profits over protecting children from harm.

European Union regulators have been considering whether all online platforms, or only larger ones or those at particular risk of exposure to illegal activities by their users, should be subjected to take-down notices, and how prescriptive these should be.

"Our position is clear: the power of major platforms over public debate and social life must be subject to democratically validated rules, in particular on transparency and accountability," an European Commission spokesperson said when asked about the allegations against Facebook.

Tech companies have said it was unfair and not technically feasible for them to police the internet. The current EU e-commerce directive says intermediary service providers play a technical, automatic and passive role.