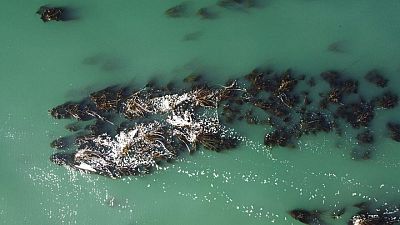 <div> <p>By Nathan Frandino</p> <p><span class="caps">GUALALA</span>, Calif. – Tranquil images of the Pacific Ocean taken by a drone show that California’s kelp forests may be making a comeback after years of depletion, bringing good news in the fight against climate change.</p> <p>    Kelp, which reduces global warming by soaking up carbon dioxide from the air via photosynthesis, has died off dramatically along Northern California’s coast, with one study calculating a loss of more than 95% since 2013 due to rising sea temperatures and disease. </p> <p>    But a team from environmental group Nature Conservancy has spotted signs of a partial recovery of kelp forests during surveys off the coast of Mendocino and Sonoma counties by drone.</p> <p>    The group first started trying to survey kelp forest from the sky in 2019 but there was hardly anything to see, said Vienna Saccomanno, who heads Nature Conservancy’s kelp monitoring and mapping program. An explosion in the population of sea urchins, which consume kelp, added to the catastrophe.</p> <p>    “There was just no kelp, literally, little to no kelp. And to be out here in 2021 and see this strong uptick in kelp is just so exciting as a scientist,” she said.</p> <p>    Flying 400 feet (120 m) up but close to the shore, the drones take pictures which are then weaved into a mosaic-like image to get a fuller understanding of kelp forests. Scientists have spotted much more of the brown seaweed than in recent years, which Saccomanno attributes to a recent upwelling of cool, nutrient-rich waters which help kelp thrive. </p> <p>    In 2019, the Nature Conservancy’s drone survey found an average size of kelp canopy of one acre and in 2020 that had increased to 5.5 acres. The numbers are not yet in for this year. </p> <p>    Kelp canopies are still below the historic average though.</p> <p>    “We know that this ecosystem is still not fully in balance and there’s still restoration work to be done,” Saccomanno said.</p> <p>    The drone technology is vital for providing data on the health of the kelp, said Kirk Klausmeyer, director of data science of Nature Conservancy’s California chapter.</p> <p>    “When dealing with problems like this, we really have to get as much data as possible. And drones allow us to get really high-resolution imagery of individual kelp plants,” he said.</p> <p>This story refiles to fix typo in word ‘upwelling’ in paragraph 6.</p> <p/> </div>