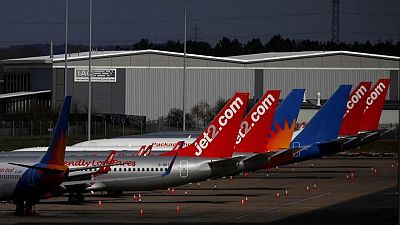 <div> <p>By Sarah Young</p> <p><span class="caps">LONDON</span> – The boss of British airline Jet2 expects ticket prices to rise because of environmental demands but believes travel demand will stay robust as consumers prioritise holidays and find alternative ways to live a greener life.</p> <p>After <span class="caps">COVID</span>-19 brought many airlines to the brink, the industry has refocused on an even bigger risk: climate change and an expected barrage of environmental taxes, legislation and new related costs over the next decade.</p> <p>“I think a lot of things in life are going to become more expensive and we’ve got to accept that that will be the case,” Jet2 Chief Executive Steve Heapy said. </p> <p>Demand will return to pre-<span class="caps">COVID</span> levels despite rising environmental consciousness and “flight shaming,” he said, referring to social pressure to avoid flying over emissions concerns. </p> <p>“Maybe people will give up red meat twice a week to have an annual holiday. It’s all going to be about choices,” he said. </p> <p>Jet2, which also sells package holidays, has committed to hitting net zero carbon emissions by 2050, as have a number of other airlines. </p> <p>It plans to offset every tonne of carbon not covered by its contribution to existing schemes from 2022, has signed a deal to buy dozens of new Airbus A321neo jets, which are more fuel efficient than current plans, and will start using sustainable aviation fuel in its jets from 2026.</p> <p>But low-emission bio-based fuels are in short supply and can cost at least three times more than kerosene. That, combined with the threat of new flying taxes, could spell trouble for airlines. </p> <p>Heapy’s main concern was that governments could impose consumption taxes on airlines, potentially hurting demand and making air travel accessible largely to the wealthy.</p> <p>“We’ve got to be seen as an industry to be taking the right steps to decarbonize as quickly as possible,” he said, calling on Britain to raise its investment in sustainable aviation fuels. </p> <p>In the shorter term, Heapy said Jet2’s bookings for this winter and summer 2022 had shot up since Britain relaxed travel rules earlier this month.</p> <p>“We could be in for a very good winter but it all depends on what the government does,” he said, adding that holiday companies needed stability and not the last-minute rule changes that have characterised Britain’s travel rules so far in 2021. </p> <p>Asked about a recent bid for British competitor easyJet, believed to have been from low-cost upstart Wizz Air, Heapy said: “I think that there probably will be consolidation. We have no plans to be involved in that.”</p> <p/> <p>(This story refiles after company clarified <span class="caps">CEO</span> comments in paragraph 7)</p> <p/> </div>