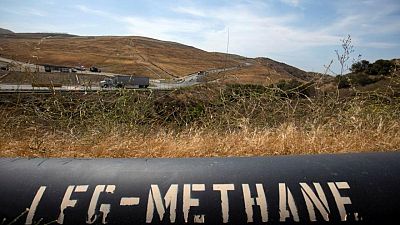 <div> <p>By Kate Abnett</p> <p><span class="caps">BRUSSELS</span> – The European Parliament’s environment committee on Tuesday rallied behind EU plans to make companies and countries cut their methane emissions, indicating lawmakers are likely to back upcoming legislation to clamp down on the potent greenhouse gas.</p> <p>Methane is the second biggest cause of climate change after carbon dioxide. It has a higher heat-trapping potential than CO2 but it breaks down in the atmosphere faster, meaning rapid reductions of methane emissions can quickly have an impact on limiting climate change.</p> <p>It is emitted from sources including leaky oil and gas pipelines and infrastructure, livestock farming and landfill sites. </p> <p>On Tuesday, parliament’s environment committee backed by 61 votes to 10 a report supporting the executive Commission’s plan, expected to be put forward in December, to make oil and gas companies report their methane emissions and find and fix leaks.</p> <p>EU countries should also face binding targets to cut their own methane emissions, which make up around 10% of EU greenhouse gas emissions, the lawmakers said.</p> <p>“By setting binding methane reduction targets, the EU can play a key role to get the rest of the world to do the same,” said Maria Spyraki, the Greek lawmaker who wrote the report.</p> <p>The lawmakers welcomed the Commission’s proposals to consider a ban on venting and flaring, when companies release methane into the atmosphere or deliberately burn it. </p> <p>The 27-member EU is the world’s biggest gas importer, and the lawmakers said Brussels should explore applying its methane legislation to fossil fuel imports, which would hit producers in countries, including Russia and Algeria.</p> <p>The full European Parliament will vote on the report next month and the legislation will only become law following a process of scrutiny by EU governments and legislators that could take up to two years.</p> <p>The EU and United States this month launched a joint pledge to cut methane emissions by 30% by 2030, from 2020 levels to try to drive international action on methane emissions. </p> <p/> </div>