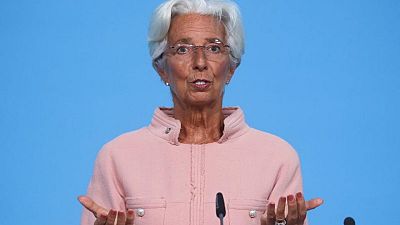 <div> <p><span class="caps">FRANKFURT</span> – Higher taxes on carbon will hit people’s pockets and make it harder for the European Central Bank to reach its inflation target if governments don’t use the extra revenue well, European Central Bank President Christine Lagarde said on Tuesday.</p> <p>The European Union has unveiled plans to cap CO2 emissions but, with natural gas prices and energy bills soaring across Europe, many economists are worrying about the cost of this green transition. </p> <p>Lagarde said governments should use the additional revenue from higher carbon taxes to compensate people hit by the rising cost of fossil fuels and to foster investment in green sources of energy. </p> <p>“The impact of carbon pricing will depend on whether the additional revenue is used to cut other consumption taxes, such as electricity taxes or <span class="caps">VAT</span>, directly support vulnerable groups or foster green investment,” she told an <span class="caps">ECB</span> conference.</p> <p>“If it is not, there is a risk that higher carbon pricing might reduce purchasing power and lead to relative price changes that push down underlying inflation.”</p> <p>She cited am academic paper, due to be presented at the <span class="caps">ECB</span>’s conference on Wednesday, showing that carbon taxes in euro area countries have raised headline inflation, which includes energy, but capped growth in other prices.</p> <p>This would be a problem for the <span class="caps">ECB</span> as it would indicate life is getting more expensive for euro zone households and businesses even though demand for most goods and services is not rising.</p> <p>The <span class="caps">ECB</span> has tried in vain for the past decade to bring sluggish price growth back to its 2% target and is now faced with an unwelcome surge in headline inflation on the back of higher fuel costs, which is partly the result of disappointing energy supply from European wind farms.</p> <p/> </div>