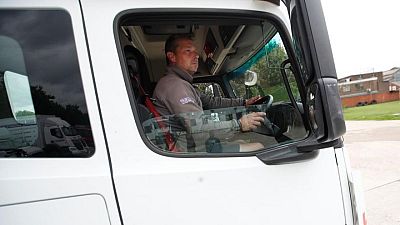 <div> <p><span class="caps">BERLIN</span> – A plan by the British government to issue temporary visas for 5,000 foreign truck drivers in the run-up to Christmas will not attract back drivers who left after Brexit, the German freight industry said on Tuesday.</p> <p>“The labour market on the European continent has gratefully accepted these workers – they are now lost to re-employment in the United Kingdom,” Frank Huster, chief executive of the German Freight Forwarding and Logistics Association, told Reuters.</p> <p>A post-Brexit shortage of truck drivers, exacerbated by a halt to truck-driving-licence testing during <span class="caps">COVID</span> lockdowns and people leaving the haulage industry, has sown chaos through supply chains. </p> <p>Many petrol stations have run dry in Britain over the past few days amid panic-buying of fuel and suppliers have warned that other shortages and price rises are looming in the run up to Christmas.</p> <p>The government announced a plan on Sunday to issue temporary visas for 5,000 foreign truck drivers, but Huster said that would not help.</p> <p>“The new UK visa regulations – especially the temporary ones – will not change this,” Huster said.</p> <p/> </div>