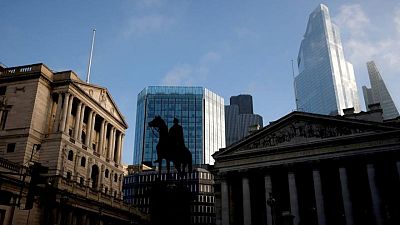 <div> <p><span class="caps">LONDON</span> -Bank of England interest rate-setter Catherine Mann said on Tuesday that inflation signals from financial markets and the labour market were not troubling, and there were signs that the pace of growth in energy prices was cooling.</p> <p>“The signal there is not troubling,” Mann said, referring to five-year ahead inflation expectations priced into financial markets. “Transitory, yes. Troubling, no.”</p> <p>Earlier on Tuesday a measure of five-year ahead inflation expectations in Britain rose to its highest since at least 2013.</p> <p>Mann, speaking in a panel discussion organised by the United States’ National Association for Business Economics, said there were no signs of a long-term spiral in inflation caused by businesses changing their pricing strategies.</p> <p>Inflation in Britain has gathered steam as the country’s economy bounces back from its nearly 10% slump last year and after a jump in energy prices around the world, as well as domestic supply chain bottlenecks and labour shortages.</p> <p>The BoE last week raised slightly its forecast for inflation at the end of the year to over 4%, more than twice its target rate, and said the case for higher interest rates appeared to have strengthened. </p> <p>Mann said she thought expectations among investors of a first BoE rate hike earlier in 2022 than previously priced would also diminish the chances of an inflation surge.</p> <p>Financial markets currently price in a first increase in BoE rates to 0.25% from 0.1% by February, with a second rate hike to 0.5% by September 2022.</p> <p>The BoE said last week it expected Britain’s inflation overshoot would be temporary, but two policymakers called for an immediate halt to its 895 billion-pound ($1.22 trillion) bond purchase programme, which is due to run until year-end.</p> <p>($1 = 0.7311 pounds)</p> </div>