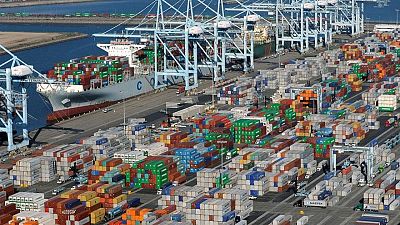 <div> <p>By Lucia Mutikani</p> <p><span class="caps">WASHINGTON</span> – New orders and shipments of key U.S.-made capital goods increased solidly in August amid strong demand for computers and electronic products, keeping business spending on equipment on track for another quarter of robust growth.</p> <p>The sustained strength in business investment is expected to limit the hit on economic growth from an anticipated slowdown in consumer spending in the third quarter as the boost from fiscal stimulus fades and <span class="caps">COVID</span>-19 infections flare up. Demand for goods is being driven by businesses desperate to replenish inventories, but strained supply chains remain a challenge.</p> <p>“The outlook for business equipment investment remains bright, with the latest business surveys suggesting growth will be sustained close to the pace seen in recent quarters,” said Michael Pearce, a senior U.S. economist at Capital Economics in New York. “The resilience of investment is one reason why we expect overall <span class="caps">GDP</span> growth will slow marginally in the third quarter, despite a bigger slump in consumption growth.”</p> <p>Orders for non-defense capital goods excluding aircraft, a closely watched proxy for business spending plans, rose 0.5% last month, the Commerce Department said on Monday. </p> <p>Data for July was revised higher to show these so-called core capital goods orders gaining 0.3% instead of the previously reported 0.1%. Economists polled by Reuters had forecast core capital goods orders increasing 0.4%. </p> <p>Orders shot up 16.4% on a year-on-year basis and are 18% above their pre-pandemic level. That is boosting manufacturing, which accounts for 11.9% of the economy, though an acute shortage labor as well as raw materials such as semiconductors are making it harder for factories to fulfill orders.</p> <p>Last month, orders for computers and electronic products rose 1.4%. There were also increases in orders for electrical equipment, appliances and components, as well as fabricated metal products. But orders for machinery fell as did those for primary metals. </p> <p>Shipments of core capital goods advanced 0.7% last month after increasing 0.9% in July. Core capital goods shipments are used to calculate equipment spending in the government’s gross domestic product measurement. Business spending on equipment has logged four straight quarters of double-digit growth.</p> <p>Stocks on Wall Street were mixed. The dollar was steady against a basket of currencies. U.S. Treasury prices fell.</p> <p><span class="caps">LEAN</span> <span class="caps">INVENTORIES</span> </p> <p>There were increases in shipments of machinery as well as computers and electronic products. But shipments of electrical equipment, appliances and components fell. </p> <p>Supply constraints, underscored by a building up of unfilled orders, and a resurgence in <span class="caps">COVID</span>-19 cases, driven by the highly contagious Delta variant of the coronavirus prompted economists early this month to slash their estimates for third-quarter <span class="caps">GDP</span> to as low as 3.5% annualized rate from as high as a 9% pace. The economy grew at a 6.6% pace in the second quarter.</p> <p>Unfilled core capital goods orders rose 1.0% in August after a similar gain in July. This together with extremely lean inventories after they were depleted in the first half of the year should keep manufacturing well supported.</p> <p>“The fact that unfilled orders are outpacing actual orders and shipments suggests that the anecdotes of companies turning away business for lack of supplies and needed help on the labor front are endemic to the broader economy,” said Tim Quinlan, a senior economist at Wells Fargo in Charlotte, North Carolina.</p> <p>“Even once bottlenecks ease, the manufacturing sector will still have plenty of work to chip away at.” </p> <p>Orders for durable goods, items ranging from toasters to aircraft that are meant to last three years or more, accelerated 1.8% after climbing 0.5% in July. They were boosted by a 5.5% rebound in orders for transportation equipment, which followed a 0.4% fall in July.</p> <p>Orders for civilian aircraft soared 77.9%. Boeing reported on its website that it had received 53 aircraft orders last month compared to 31 in July. </p> <p>But orders for motor vehicles and parts fell 3.1% after rising 5.3% in July. General Motors and Ford this month announced further production cuts as they adjust their schedules to manage their chip supply. </p> <p>Unfilled orders of durable goods increased 1.0% last month after rising 0.5% in July. Durable goods inventories climbed 0.8%, matching July’s gain.</p> <p>“Inventory levels of final goods have been run down, but the durables report shows inventories of manufactured goods steadily increasing,” said Andrew Hollenhorst, chief U.S. economist at Citigroup in New York. </p> <p>“In some sectors this is because supply-chain issues are emerging after some degree of manufacturing has taken place, meaning partially completed goods, most notably autos, are reflected in the report.”</p> <p/> </div>