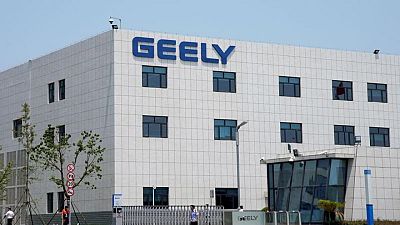 <div> <p>By Josh Horwitz and Brenda Goh</p> <p><span class="caps">SHANGHAI</span> – A new venture from the founder of Chinese automaker Zhejiang Geely Holding will aim to release its first smartphone by 2023 and sell 3 million units in its first year, according to a memo seen by Reuters.</p> <p>Geely, which owns Volvo, announced on Tuesday that chairman Eric Li, also known as Li Shufu, will launch a new company that will make premium smartphones, taking it into a competitive sector dominated by a handful of giants.</p> <p>Although Li has made futuristic bets on ventures such as flying cars and helicopter taxis, a foray into phones puts Geely into a highly competitive sector that is no longer growing in China and is dominated by a handful of players including Apple, China’s Xiaomi Corp and others.</p> <p>Geely is the first established carmaker to commit to selling smartphones, though smartphone makers are venturing into the electric vehicle market. </p> <p>“There is a close connection in technologies within intelligent vehicle cockpits and smartphone technologies,” Li said in the statement. “The major trend in the coming future is to create user ecosystems across borders and provide users with a more convenient, smarter and seamlessly connected multi-screen experience.”</p> <p>The statement said Li’s new company, Hubei Xingji Shidai Technology Co Ltd, has signed an agreement with the Wuhan Economic and Technological Development Zone to set up a headquarters in the central city of Wuhan, where it will develop smart devices including smartphones.</p> <p>Public records show that Li owns 55% of Xingji Shidai.</p> <p>According to an internal memo seen by Reuters, the project will be funded with a 10 billion yuan ($1.55 billion) investment and is also targeting revenue of 10 billion yuan in its first year.</p> <p>It aims to achieve cumulative revenue of 150 billion yuan within eight years, employ 3,000 people, and eventually go list on the stock market, the memo also said. Geely declined to comment on the memo.</p> <p>Shipments of handsets to China last year dropped 11% to 330 million units. Globally, consumers are taking longer to upgrade to newer models as improvements in performance and features are incremental. </p> <p>Will Wong, who tracks China’s smartphone market at research firm <span class="caps">IDC</span>, said Geely’s brand recognition in China would help it break into the premium market.</p> <p>“Nevertheless, the focus of Geely’s mobile phone business is likely to be more on strengthening its ambitions for intelligent vehicle development, in which all automakers are seeking a key differentiator to succeed,” Wong said.</p> <p>Globally, Apple dominates the market for phones priced over $400, with a market share of 57%, according to Counterpoint Research. Samsung follows behind with a 17% share.</p> <p>Consumer hardware companies have been piling into the smart electric vehicle sector.</p> <p>In March, Xiaomi founder Lei Jun said his company would formally enter the electric vehicle market and invest $10 billion over the next 10 years. Huawei and Foxconn have also entered the sector via partnerships, while Apple has reportedly been conducting research and development for a smart car of its own.</p> <p/> </div>