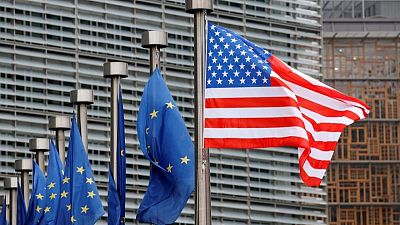 <div> <p>By Nandita Bose and David Lawder</p> <p><span class="caps">WASHINGTON</span> – The United States and the European Union hope to discuss chip shortages, artificial intelligence (AI) and tech competition issues during the first Trade and Tech Council (<span class="caps">TTC</span>) meeting this week, senior U.S. administration officials said on Monday.</p> <p>On Thursday, Reuters was first to report https://www.reuters.com/technology/exclusive-us-eu-look-work-more-closely-regulating-big-tech-summit-2021-09-23 the actions the United States and the European Union are planning to announce from the first <span class="caps">TTC</span> meeting, such as taking a more unified approach to limit the growing market power of Big Tech. </p> <p>Earlier this month, the White House announced that the council would meet for the first time on Sept. 29 in Pittsburgh.</p> <p>U.S. Secretary of State Antony Blinken, Commerce Secretary Gina Raimondo, U.S. Trade Representative Katherine Tai and EU trade chief Valdis Dombrovskis are scheduled to attend along with European Commissioner for Competition Margrethe Vestager.</p> <p>On Sunday, EU’s trade and digital chiefs said https://www.reuters.com/world/us/eu-says-us-trade-tech-council-boost-its-clout-set-rules-21st-century-2021-09-26 the council would give Europe more clout and set standards and rules for the 21st century. </p> <p>“We as an administration believe in strong pro-competition regulation. … We do think as a piece of that we have opportunities to work together with the European Union,” an administration official said.</p> <p>The administration officials said the United States is discussing with their European counterparts issues and recommendations they have around the Digital Markets Act and the Digital Services Act – legislative proposals from the European Union that offer a framework for regulating the tech sector.</p> <p>Several tech trade groups in Washington said the industry does not want the European approach to digital regulation to be adopted in the United States.</p> <p>“The risk is that the European side will press the United States to harmonize its regulations with the EU by taking a precautionary approach … which would skewer America’s leading tech companies,” said Robert Atkinson, president of the Information Technology & Innovation Foundation, a tech think tank based in Washington.</p> <p>“We shouldn’t do that, nor do we need to. Our interests are broadly aligned and compatible, particularly when it comes to China,” Atkinson said.</p> <p>The powerful U.S. Chamber of Commerce said the <span class="caps">TTC</span>’s actions should “avoid policies and regulatory measures that target businesses headquartered in the other party — explicitly or implicitly — through law or regulation.”</p> <p>Mitigating a severe chips shortage that has hurt companies including U.S. automakers will be a priority for the panel, the officials said. </p> <p>The development and implementation of AI that enhances privacy protections will also be looked at and a joint study on how the technology affects global trade will be undertaken, they said.</p> <p>A U.S. administration official also said U.S.-EU discussions on steel and aluminum tariffs are proceeding on a separate track from the <span class="caps">TTC</span> process, hopefully with guidance on the path forward by the end of the year.</p> <p/> </div>