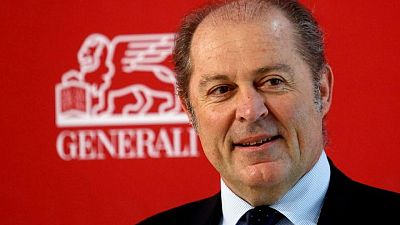 <div> <p>By Gianluca Semeraro and Claudia Cristoferi</p> <p><span class="caps">MILAN</span> -The board of Assicurazioni Generali on Monday threw its weight behind the reappointment of Chief Executive Philippe Donnet, overlooking opposition from two leading shareholders in Italy’s top insurer, two people close to the matter said.</p> <p>Donnet’s fate had been called into question by a boardroom row at Generali, Europe’s third-largest insurer and one of Italy’s most prized financial assets, just as the French manager prepared to present a new business plan in December. </p> <p>The two sources said Generali’s outgoing board had agreed by a majority vote to file a slate of nominees for shareholders to vote upon in the spring, including Donnet as <span class="caps">CEO</span>.</p> <p>The decision was backed by nine of 13 members of the board, one of the sources said. </p> <p>The source said the board would set up a dedicated committee to put together the list, with support from headhunters and legal advisers as well as oversight from Generali Chairman Gabriele Galateri.</p> <p>Donnet’s reappointment meets resistance from influential Italian businessmen Francesco Gaetano Caltagirone, 78, and Leonardo Del Vecchio, 86.</p> <p>The two tycoons, respectively Generali’s second and third largest investors, have criticised Donnet’s merger and acquisition strategy as too timid.</p> <p>On the contrary, top investor Mediobanca backs a third mandate for Donnet, who has steered Generali through the <span class="caps">COVID</span>-19 crisis, keeping it on track to meet targets to the end of 2021.</p> <p>Del Vecchio, founder of Ray-Ban owner Luxottica, and Caltagirone, a construction magnate, have been steadily lifting their Generali stakes, while also building holdings in Mediobanca, piling pressure on its boss Alberto Nagel.</p> <p>Earlier this month Del Vecchio and Caltagirone announced an accord to consult over decisions concerning Generali, where they control a combined 12.5% stake after a third smaller investor recently joined their pact.</p> <p>That threshold is not far from Mediobanca’s 13% stake in Generali, which makes the insurer a major contributor to the profit of the Milanese investment bank, which last week borrowed more shares in Generali to reach 17.2% of the Trieste-based insurer’s voting rights.</p> <p>Del Vecchio, who two years ago rocked Italy’s financial establishment by emerging as the biggest investor in Mediobanca, has criticised its reliance on the Generali stake.</p> <p>Mediobanca has said it would keep the beefed-up voting stake in Generali until next spring’s <span class="caps">AGM</span>, where shareholders will have the last word on the choice of <span class="caps">CEO</span>.</p> <p>Institutional investors, which account for around 40% of Generali’s shareholder base, will play a key role.</p> <p>Del Vecchio and Caltagirone are ready to back an alternative list of nominees for the board’s renewal, people with knowledge of the matter have previously told Reuters.</p> </div>