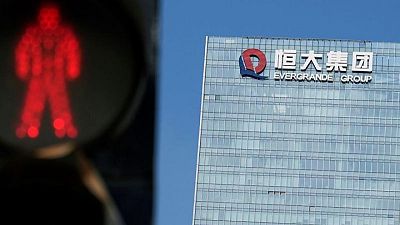 <div> <p><span class="caps">SINGAPORE</span> – The cost of borrowing China Evergrande shares rocketed last week, data from research firm <span class="caps">FIS</span> Astec shows.</p> <p>Short sellers borrow shares, sell them and hope to buy them back for a lower price. They are paying fees equivalent to annualised rates of 92%, <span class="caps">FIS</span> Astec figures as of Sept. 23 show.</p> <p>That is up from 50% two weeks earlier.</p> <p>Only about 2.2% of Evergrande’s outstanding shares are on loan, the data shows. The Chinese developer owes $305 billion, is short on cash and its share price is down 83% this year.</p> <p>Market participants have said the surge in borrowing costs reflects both rising enthusiasm for short positions in the company and a scramble to find stock to borrow as lenders have recalled shares to dump positions.</p> <p>Borrowing costs for some other developers have climbed, but not to the same extent, according to <span class="caps">FIS</span> Astec. </p> <p>Annualised rates for Guangzhou R&F Properties’ shares, for example, rose from less than 1% at the start of the month to 6.6% on Sept. 23.</p> <p/> </div>