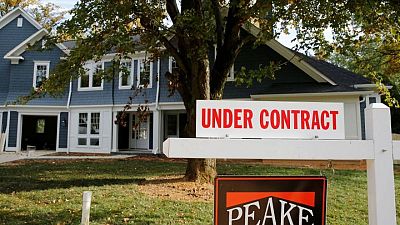 <div> <p>By Lucia Mutikani</p> <p><span class="caps">WASHINGTON</span> – Sales of new U.S. single-family homes increased for a second straight month in August, but demand for housing has probably peaked after a <span class="caps">COVID</span>-19 pandemic-fueled buying frenzy.</p> <p>The report from the Commerce Department on Friday also showed the supply of new homes on the market last month was the largest in nearly 13 years, with prices unchanged on a monthly basis. It followed on the heels of news on Wednesday that sales of previously owned homes fell in August. </p> <p>“These data suggest that the surge in new home sales during the pandemic has ebbed and inventories of unsold homes have risen to a more normal level in relation to sales,” said Conrad DeQuadros, senior economic advisor at Brean Capital in New York. “This report and the existing home sales data for August suggest that a considerable portion of the flow adjustment of sales to higher demand may have taken place.”</p> <p>New home sales rose 1.5% to a seasonally adjusted annual rate of 740,000 units last month. July’s sales pace was revised up to 729,000 units from the previously reported 708,000 units. </p> <p>Sales increased 6.0% in the populous South and gained 1.4% in the West. They soared 26.1% in the Northeast, but tumbled 31.1% in the Midwest. Economists polled by Reuters had forecast new home sales, which account for about 11.2% of U.S. home sales, increasing to a rate of 714,000 units.</p> <p>Sales decreased 24.3% on a year-on-year basis in August. They have struggled to post significant gains since surging to a rate of 993,000 units in January, which was the highest since the end of 2006. Builders have been constrained by higher prices for inputs, as well as shortages of land and labor. </p> <p>About 78% of homes sold last month were either under construction or yet to be built.</p> <p>“This report continues to highlight the ongoing difficulties that homebuilders are facing as they attempt to work through their current construction backlog, due to a shortage of labor and elevated material costs and outright shortages,” said Mark Palim, deputy chief economist at Fannie Mae in Washington. </p> <p>Stocks on Wall Street were trading lower as worries persisted about the spillover from debt-laden China Evergrande. The dollar slipped against a basket of currencies. U.S. Treasury prices fell.</p> <p/> <p>(<span class="caps">GRAPHIC</span>: New home sales – https://graphics.reuters.com/USA-<span class="caps">STOCKS</span>/dwpkrdqzwvm/nhs.png) </p> <p/> <p><span class="caps">DEMAND</span> <span class="caps">LIKELY</span> <span class="caps">PEAKED</span> </p> <p>The coronavirus pandemic sparked an exodus from cities as Americans worked from home and took classes online. That boosted demand for bigger homes in the suburbs and other low-density areas, which far outpaced supply, causing bidding wars. </p> <p>But demand has likely peaked. The National Association of Realtors reported on Wednesday that sales of previously owned homes fell in August, with house prices continuing to moderate sharply after posting record increases in May. </p> <p>Some sellers are reducing their asking prices and consumer sentiment towards buying a home has shifted. </p> <p>Demand for housing could cool after the Federal Reserve said on Wednesday it would likely begin reducing its monthly bond purchases as soon as November and signaled interest rate increases may follow more quickly than expected.</p> <p>Still, the fundamentals for the housing market remain strong. A tightening labor market is lifting wages. The new housing market remains underpinned by an acute shortage of previously owned home. </p> <p>The median new house price shot up 20.1% in August to $390,000 from a year ago. Prices were unchanged on a monthly basis. Last month, new home sales remained concentrated in the $200,000-$749,000 price range. </p> <p>Sales in the under-$200,000 price bracket, the sought-after segment of the market, accounted for just 3% of transactions.</p> <p>There were 378,000 new homes on the market in August. That was the most since October 2008, and up from 366,000 in July. Houses under construction made up 62.7% of the inventory, with homes yet to be built accounting for a record 27.8%.</p> <p>“The need to work through these backlogs should support new home construction in the months ahead even if the pace of sales moves sideways,” said Nancy Vanden Houten, a U.S. economist at Oxford Economics in New York.</p> <p>At August’s sales pace it would take 6.1 months to clear the supply of houses on the market, up from 6.0 months in July.</p> <p/> </div>