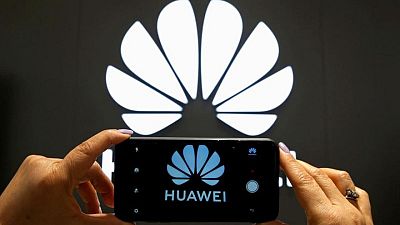 <div> <p>By David Kirton</p> <p><span class="caps">SHENZHEN</span>, China -China’s Huawei Technologies will see revenue from its smartphone business drop by at least $30-40 billion in 2021, with new growth streams unlikely to make up the shortfall in the next few years, chairman Eric Xu said. </p> <p>While the firm has been “getting used to U.S. sanctions” imposed on it since 2019, its new 5G related business areas cannot offset the losses from the handset business, Xu, who is rotating chairman this year, said at a press conference in Beijing on Friday.</p> <p>Former U.S. president Donald Trump put Huawei on an export blacklist in 2019 and barred it from accessing critical U.S.-origin technology, impeding its ability to design its own chips and source components from outside vendors.</p> <p>The sanctions hit Huawei’s smartphone business particularly hard. </p> <p>Once briefly the world’s biggest smartphone vendor, Huawei dropped out of the ranks of China’s top five sellers in the second quarter for the first time in more than seven years, according to research firm Canalys.</p> <p>Smartphone still brought in around $50 billion in revenue last year, Xu said. Huawei reported its biggest ever revenue drop in the first half of 2021, generating 320.4 billion yuan. ($49.57 billion)</p> <p>Xu said his “biggest hope” for the company is that it will still exist in five to ten years.</p> <p>China’s efforts to develop its semiconductor industry have shown “quite encouraging results”, Xu said, but addressing Huawei’s supply chain challenges will take a long time.</p> <p><span class="caps">NEW</span> <span class="caps">GROWTH</span> <span class="caps">AREAS</span></p> <p>The Biden administration has shown little inclination to reduce the pressure on Huawei so far, with U.S. Commerce Secretary Gina Raimondo telling Reuters on Thursday that it will take further steps against the company if needed. [L1N2QP2MO]</p> <p>The company has been looking for new areas of growth such as 5G and AI-based infrastructure upgrades to airports and mines. China will be a world leader in applying 5G technology in the next few years, Xu said.</p> <p>The company is also exploring investments in areas that have nothing to do with the chipset supply chain, Xu said.</p> <p>Reuters reported in August that the Tianjin State-owned Assets Supervision and Administration Commission (<span class="caps">SASAC</span>), which oversees local government-backed companies, has asked municipally controlled companies to migrate their data from private sector operators to a state-backed cloud system by next year.</p> <p>When asked about the establishment of a China state-run cloud and how the Tianjin <span class="caps">SASAC</span>’s plan would affect Huawei, Xu said that Huawei was examining its position as a potential service provider. </p> <p>He also pointed out that the move was not coming from the state government or Tianjin local government without elaborating further.</p> <p>He added that he believed an idea of setting up a separate cloud infrastructure would have likely arisen because existing cloud service providers are not doing a good enough job to assure users that they can put their data on their systems.</p> <p>($1 = 6.4636 Chinese yuan)</p> </div>