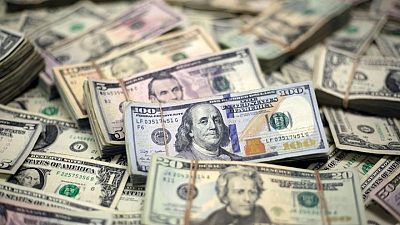 <div> <p>By Chuck Mikolajczak</p> <p><span class="caps">NEW</span> <span class="caps">YORK</span> – The dollar rose on Friday and was poised for its third straight week of gains against a basket of major currencies, as uncertainty over beleaguered Chinese property developer Evergrande helped the greenback bounce back from a sharp decline in the prior session. </p> <p>China Evergrande Group owes $305 billion and has run short on cash, missing a Thursday deadline for paying $83.5 million and leaving investors questioning whether it will make the payment before a 30-day grace period expires. A collapse of the company could create systemic risks to China’s financial system. </p> <p>The safe-haven dollar had its biggest one-day percentage drop in about a month on Thursday after Beijing injected new cash into the financial system and Evergrande announced it would make interest payments on an onshore bond, boosting risk sentiment.</p> <p>The offshore Chinese yuan weakened versus the greenback at 6.4641 per dollar.</p> <p>The decline came a day after the greenback was lifted by Wednesday’s announcement from the U.S. Federal Reserve that it will likely begin to trim its monthly bond purchases as soon as November and flagged interest rate increases may follow suit sooner than expected as the central bank moves away from its pandemic crisis policies.</p> <p>“We are in one of the situations, and this doesn’t always happen, where the dollar is the beneficiary of multiple ideas,” said Joseph Trevisani, senior analyst at <span class="caps">FXS</span>treet.com.</p> <p>“The U.S. economy does look better than most of its competitors, there is lingering fear out there over Evergrande and what else is out there in the rather untransparent Chinese economy and political system, plus the Fed appears finally ready.” </p> <p>The dollar index rose 0.237%, with the euro down 0.2% to $1.1713.</p> <p>Kansas City Fed President Esther George said the U.S. labor market has already met the central bank’s test to pare its monthly bond purchases, and the discussion should now turn to how its massive bondholding could complicate the decision on when to hike rates. </p> <p>Cleveland Fed President Loretta Mester echoed the sentiment for a tapering this year, and said the central bank could start raising rates by the end of next year should the job market continue to improve as expected.</p> <p>In prepared remarks in a listening session with a wide swath of economic players, Fed Chair Jerome Powell did not elaborate on his own economic or monetary policy outlook, which he had outlined at the close of the two-day Fed meeting on Wednesday.</p> <p>Sterling weakened a day after hawkish comments from the Bank of England on Thursday pushed the pound to its biggest one-day percentage gain since Aug. 23.</p> <p>The Japanese yen weakened 0.43% versus the greenback at 110.77 per dollar, while Sterling was last trading at $1.3666, down 0.36% on the day. </p> <p>Cryptocurrencies slumped after China’s most powerful regulators increased the country’s crackdown on the digital assets, with a blanket ban on all crypto transactions and crypto mining.</p> <p>Bitcoin, the world’s largest cryptocurrency, last fell 5.89% to $42,256.47. </p> <p>Smaller coins, which generally move in tandem with bitcoin, also dropped. Ether last fell 8.08% to $2,899.10 while <span class="caps">XRP</span> last fell 7.2889413% to $0.93.</p> <p/> <p/> </div>