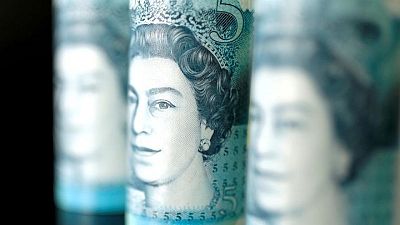 <div> <p><span class="caps">LONDON</span> – Sterling dipped against the dollar on Friday, losing some of its gains from a rally which followed the Bank of England taking a hawkish tone on interest rates and its pandemic-era government bond buying scheme.</p> <p>Markets brought forward their expectations of an interest rate rise after the central bank lifted on Thursday its forecast for inflation and two of its policymakers called for an immediate halt to its 895 billion pound ($1.23 trillion) bond purchase programme.</p> <p>“A first rate step in Q1 is now priced in by financial markets which is likely to provide support for sterling for now,” wrote Commerzbank analyst Esther Reichelt, adding however that the Britain’s economic recovery raised questions moving forward. </p> <p>“To be quite clear: we consider the current <span class="caps">GBP</span> strength to be justified, but continued challenges for economic growth such as the labour shortages that have been aggravated by Brexit are likely to prevent a rapid tightening of monetary policy,” she added. </p> <p>The pound, which had risen as high as $1.375 during the previous session, retreated to about $1.371 by 0830 <span class="caps">GMT</span>. </p> <p>The currency was trading around $1.368 before the BoE announcement.</p> <p>Against the euro, the pound ticked 0.09% down at 85.60 pence. </p> <p>Sterling took a hit on Monday after worries about China’s Evergrande defaulting on its debts sent investors into safer assets and currencies.</p> <p>After a brief respite, investors continued to worry about the fate of the Chinese property developer which missed an interest payment deadline on Thursday and has entered a 30-day grace period.</p> <p>Stock markets in Asia and Europe fell on Friday and risk-oriented currencies were under pressure given the potential consequences of an Evergrande default.</p> <p/> </div>