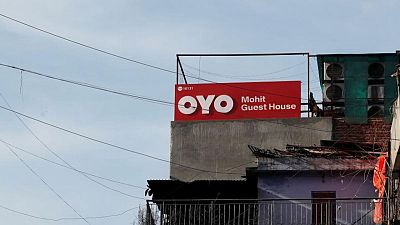 <div> <p>By Chandini Monnappa</p> <p><span class="caps">BENGALURU</span> -SoftBank Group-backed Indian hospitality startup Oyo Hotels and Rooms is expected to file for an initial public offering (<span class="caps">IPO</span>) next week to raise around $1 billion, a source told Reuters on Thursday. </p> <p>The hotel aggregator is looking to list in India’s financial capital of Mumbai and its <span class="caps">IPO</span> is tentatively pegged at between $1 billion and $1.2 billion, the source said, adding it will consist of a fresh issue of shares and an offer for sale from existing shareholders.</p> <p>Oyo did not immediately respond to a request for comment.</p> <p>The listing plan follows a stellar debut by food delivery firm Zomato Ltd in July. Berkshire Hathaway Inc-backed Paytm and private equity firm <span class="caps">TPG</span>-backed Nykaa have also filed for <span class="caps">IPO</span>. Ride-hailing firm Ola, which is also backed by SoftBank, is also set to enter markets.</p> <p>Oyo, in which SoftBank owns a 46% stake and is one of its biggest bets, has endured months of layoffs, cost-cuts and losses during the global health crisis. </p> <p>Its founder and Chief Executive Ritesh Agarwal had said in July that business was likely to return to levels seen before the second wave of <span class="caps">COVID</span>-19 infections in India and “grow from there”.</p> <p>Last month, Oyo received a $5 million investment from Microsoft Corp. Kotak Mahindra Capital, JP Morgan and Citi are the bankers advising Oyo on the <span class="caps">IPO</span>, the source said.</p> </div>