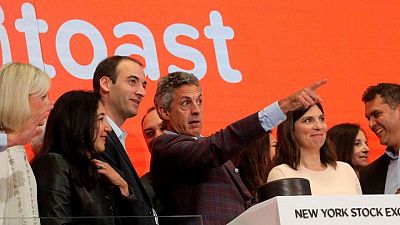 <div> <p>By Sohini Podder, Echo Wang and Krystal Hu</p> <p> -Toast Inc fetched a valuation of nearly $33 billion in its New York Stock Exchange debut on Wednesday, as shares of the restaurant software provider jumped 63%, underscoring a deep investor appetite for fast-growing software firms.</p> <p>The stock opened at $65.26, compared with its initial public offering price of $40 per share. The valuation marked a substantial jump from the company’s last private funding round when it was valued at $4.9 billion in February 2020. </p> <p>Toast’s listing comes at a time when digital transformation among restaurants has accelerated during the pandemic, and merchants have adopted Toast software to manage takeout system through first-party delivery or working with partners, including DoorDash Inc and Uber Eats.</p> <p>“We’re in our early days, and we believe that we could be the unified platform that powers the restaurant industry,” said Chris Comparato, chief executive at Toast.</p> <p>The Boston-based company builds software that helps restaurants manage online orders and dine-in order, operate an on-demand delivery network and integrate payments.</p> <p>Founded in 2011, Toast counts <span class="caps">TPG</span>, Tiger Global Management and Bessemer Venture Partners among its backers. It partnered with nearly 48,000 restaurant locations and processed more than $38 billion in gross payment volumes over the 12 months ended June 30. </p> <p>As restaurant revenues plunged due to lockdowns and other restrictions, Toast cut its workforce and launched new features to cater to the shifts in dining behavior, including contactless ordering, indoor dining payments through QR codes, curbside notifications for takeout and deliveries on a flat-fee basis.</p> <p>Toast’s net loss widened to $235 million for the six months ended June 30, from $125 million a year earlier. Revenue, however, more than doubled to $704 million.</p> <p>The company sold 21.7 million shares in its <span class="caps">IPO</span>, raising about $869.6 million. Its <span class="caps">IPO</span> was priced above an earlier targeted price range of $34 to $36 per share.</p> <p>Goldman Sachs, Morgan Stanley and J.P. Morgan were the lead underwriters for Toast’s <span class="caps">IPO</span>.</p> </div>