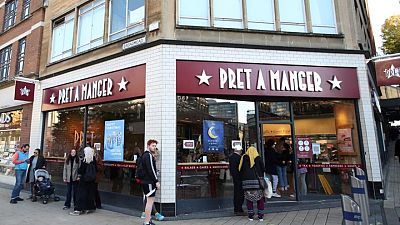 <div> <p>By James Davey</p> <p><span class="caps">LONDON</span> – Coffee and sandwich chain Pret A Manger plans to double in size over the next five years, replacing a previous UK focus on offices with expansion in regional and suburban areas, transport hubs and motorway service stations.</p> <p>Urban fast food outlets were hit hard during the <span class="caps">COVID</span>-19 pandemic, prompting some to re-think their growth strategies.</p> <p>Pret, owned by investment group <span class="caps">JAB</span> and founder Sinclair Beecham, said on Wednesday it plans to open more than 200 UK shops in the next two years, including 100 franchise shops.</p> <p>It also intends to enter five new markets in Europe, the Middle East and Asia by the end of 2023 and invest in new digital capabilities.</p> <p>Pret, as it is commonly known, currently runs 550 shops across five markets, the UK, U.S., France, Dubai and Hong Kong.</p> <p>Majority owner <span class="caps">JAB</span> and Beecham will invest a further 100 million pounds ($137 million), on top of the 185 million pounds they ploughed in to get Pret through <span class="caps">COVID</span>.</p> <p>Pret closed stores and shed jobs during the crisis as revenue slid 58% to 299 million pounds in 2020 and the group recorded an operating loss of 256.5 million pounds.</p> <p>Many of its UK stores are located close to offices, which were badly hit when people started working from home.</p> <p><span class="caps">SKYSCRAPER</span> <span class="caps">SHIFT</span></p> <p>Pret said its recovery plan shifts from “following the skyscraper” to serving more people across the UK and overseas.</p> <p>“Pret has just under 400 stores in the UK and a lot of our national competitors have 2,000-2,500, so we see that there’s huge runway for us to grow the brand,” Pret <span class="caps">CEO</span> Pano Christou told Reuters.</p> <p>“We are just broadening our approach to growth,” he said.</p> <p>Pret said that over the last month its trading had gathered pace, with regional shops performing at their strongest levels.</p> <p>The group’s workforce has grown 28% since the start of 2021. It now employs nearly 8,000 globally, including 6,400 in the UK, and is aiming to hire a further 3,000 by the end of 2023.</p> <p>To help it survive the pandemic, Pret has transformed its operating model and last year launched a subscription service for drinks.</p> <p>The service was added to the U.S. last week and launches in other markets are planned over the next few months, Christou said.</p> <p>Pret is also selling coffee lines through Amazon, Waitrose, Sainsbury’s, Tesco and Ocado, has delivery partnerships with Deliveroo, Just Eat and Uber Eats and is also trialling shops within Tesco stores.</p> <p>($1 = 0.7312 pounds) </p> <p/> </div>