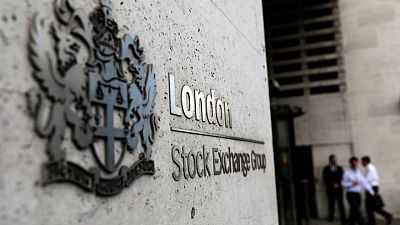 <div> <p>By Shashank Nayar</p> <p> -London’s <span class="caps">FTSE</span> 100 rebounded on Tuesday, aided by gains in energy and healthcare stocks, and Entain jumped to the top of the index after the Ladbrokes owner said it received an offer from DraftKings.</p> <p>The blue-chip <span class="caps">FTSE</span> 100 ended 1.0% higher and recorded its best session in two months. Oil major BP and Royal Dutch Shell were among the top boosts.</p> <p>Entain jumped 18.0%, leading gains on travel and leisure stocks, after it confirmed that U.S. fantasy sports betting company DraftKings has made an offer to buy the British gambling firm in a deal that one media report said could be valued at $20 billion.</p> <p>The <span class="caps">FTSE</span> 100 has gained 8% so far this year on support from dovish central bank policies and re-opening optimism. However, higher inflation pressures have raised scepticism among investors that central banks might hint later this week towards pulling back massive asset purchases sooner than expected.</p> <p>“Investors are still progressing ahead with fingers crossed as the Fed and the BoE are unlikely to declare any tapering measures this time, as it would potentially unsettle the global equity environment before the third-quarter earnings season,” said Kunal Sawhney, chief executive at Kalkine.</p> <p>Healthcare stocks gained 1.5% with drugmakers including AstraZeneca , Indivior , Oxford BioMedica up between 1.6% and 4.8%. </p> <p>The domestically focussed mid-cap index rose 0.8%, with travel stocks being among the top gainers.</p> <p>In earnings-driven moves, Kingfisher fell 4.9% to the bottom of the <span class="caps">FTSE</span> 100 even as the British home improvement retailer reported a jump in first-half profit.</p> <p>Royal Dutch Shell jumped 3.6% after it said it would sell its Permian Basin assets to ConocoPhillips for $9.5 billion in cash, exiting the largest U.S. oilfield. </p> <p>British transport company Stagecoach Group surged 27.0% to the top of mid-cap index, after it said it was in talks with rival operator National Express about a possible all-share merger. National Express was up 7.6%.</p> <p>Semiconductor technology company Alphawave jumped 19.4% on raising its 2021 guidance after reporting a 140% rise in first-half revenue. </p> </div>