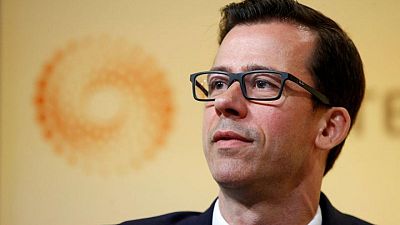 <div> <p><span class="caps">LONDON</span> – Former Bank of England policymaker Gertjan Vlieghe has agreed to join major U.S. hedge fund Element Capital as its chief economist, a representative for the company said on Monday.</p> <p>Vlieghe served for six years on the BoE’s Monetary Policy Committee before stepping down at the end of August when his second three-year term as an external member expired. Prior to joining the <span class="caps">MPC</span> he had been a partner at hedge fund Brevan Howard.</p> <p>Element Capital manages around $15 billion of assets. The fund closed to new investment in 2018 and returned $2 billion to investors early this year.</p> <p>Vlieghe will be based in London and is expected to start his new role before the end of the year. News of his appointment was first reported by the Financial Times.</p> <p>During his time as a policymaker, Vlieghe was generally fairly dovish and favoured cutting interest rates below zero if Britain’s economy weakened further.</p> <p>A few months later as Britain’s economy continued to recover from the <span class="caps">COVID</span>-19 pandemic, he said the BoE was likely to raise rates in 2022.</p> <p>In his final BoE speech https://www.bankofengland.co.uk/speech/2021/july/gertjan-vlieghe-speech-at-the-london-school-of-economics in July, Vlieghe highlighted the role of ageing populations and higher income inequality in pushing down global interest rates, as well as the limited capacity of central banks to ease financial conditions in future downturns.</p> <p/> </div>