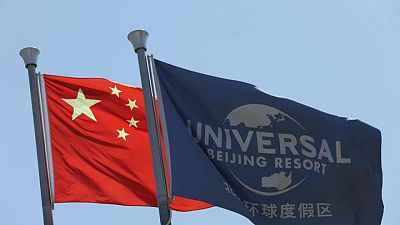 <div> <p>By Martin Quin Pollard</p> <p><span class="caps">BEIJING</span> -Universal Studios’ Beijing resort opened its doors to the public on Monday after a two-decade wait, including delays because of the <span class="caps">COVID</span>-19 pandemic.</p> <p>The highly anticipated opening takes place amid U.S.-China relations that have deteriorated in recent years.</p> <p>The park will be U.S.-based Universal’s largest and its fifth globally. It is also a first for Beijing, which lacks a big branded theme park to rival the Disney resorts in Shanghai and Hong Kong.</p> <p>And, it will be the first Universal park with a section dedicated to the movie “Kung Fu Panda” and includes an area based on the Harry Potter franchise, which is popular in China.</p> <p>Amid light rain and tight security on Monday, a public holiday in China to mark the Mid-Autumn Festival, a steady stream of umbrella-wielding visitors entered the resort. </p> <p>“When it comes to Universal Studios, we’re all big fans of Marvel movies,” said 27-year-old Beijing resident Pi Tiantian, who visited the park on Monday.</p> <p>“We really want to experience this resort. This one here also really likes Harry Potter,” she added, pointing to a young male companion.</p> <p>One Universal Studios employee told Reuters that visitor numbers were being capped at around 10,000 for Monday because of the pandemic but the park has the capacity for many more.</p> <p>All 10,000 tickets for the opening, available in a pre-sale on Sept. 14, were sold out in three minutes, according to Trip.com Group.</p> <p>“This is a rare time in a long while when an America-themed topic has attracted such obvious and widespread praise in China,” the Global Times, a nationalistic tabloid published by the ruling Communist Party’s People’s Daily, wrote last week. </p> <p>Beijing-based visitors snatched 40% of the tickets for the first month, while the cities of Tianjin and Shanghai were the second- and third-largest sources of patrons, according to travel website qunar.com.</p> <p>Still, many buyers complained on social media about ticket costs, which range from 418 yuan ($64.76) in the low season to 748 yuan during peak periods.</p> <p>The resort was proposed 20 years ago by the Beijing Tourism Group, according to the official China Daily, and is 30% owned by Comcast Corp’s Universal Parks & Resorts and 70% by state-owned Beijing Shouhuan Cultural Tourism Investment.</p> <p>The new Chinese ambassador to Washington, Qin Gang, likened the park’s rollercoaster ride to ties between the two countries.</p> <p>“After all the tumbling and shakes, the rollercoaster came to a soft landing in the end,” he tweeted on Sept. 14. </p> <p>Universal Studios announced the development of the resort in 2014 at an estimated cost of $3.3 billion. In 2017, Comcast Chief Executive Brian Roberts said https://www.attractionsmanagement.com/index.cfm?subID=0&pagetype=news&codeID=334757&dom=n&email=web&pub=AMe&date= the park could provide $1 billion of operating cash flow per year once open. </p> <p>The park is estimated to earn more than 10 billion yuan ($1.6 billion) a year in revenue with up to 12 million visits, according to state-run Beijing Daily. </p> <p>($1 = 6.4549 yuan)</p> </div>

How is Norway balancing fossil fuels with its green tech ambitions?