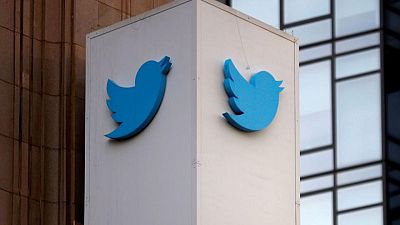 <div> <p>By Tom Hals and Nivedita Balu</p> <p> -Twitter Inc said on Monday it would pay $809.5 million to settle a shareholder class action lawsuit accusing the social media company of deceiving investors about how often people used its platform.</p> <p>The settlement resolved a case that had been on the verge of going to trial. Jury selection had been scheduled to begin on Monday, but at a Sept. 17 hearing U.S. District Judge Jon Tigar in Oakland, California postponed it until late November.</p> <p>Twitter, former Chief Executive Officer Richard Costolo and former Chief Financial Officer Anthony Noto denied wrongdoing in agreeing to the settlement, which requires Tigar’s approval.</p> <p>“The jury trial is a great equalizer, even for some of the most powerful entities on the planet,” said Tor Gronborg, a partner at Robbins Geller Rudman & Dowd representing the shareholders.</p> <p>In early afternoon trading, Twitter shares were down 3.8% at $60.11. Twitter said it expects to use cash on hand to pay the settlement amount in the fourth quarter of this year, and record a related charge in the third quarter.</p> <p>Shareholders sued Twitter in September 2016, alleging it artificially inflated its stock price by misleading them about user engagement.</p> <p>According to the complaint, Twitter discontinued reporting “timeline views” in late 2014, and concealed stagnating or declining user engagement by reporting vague descriptions of user metrics.</p> <p>Shareholders said Twitter acknowledged the truth after Costolo left the company in June 2015, and its stock price dropped 20%. </p> <p>The class action covers investors who purchased the stock from Feb. 6, 2015 to July 28, 2015. </p> <p>Since 1996, only nine of the more than 5,000 U.S. securities class action cases filed by stock investors gone through trial to a verdict, the Securities Class Action Clearinghouse said.</p> <p>Slightly more than half of the lawsuits are dismissed, and most of the rest settle.</p> </div>