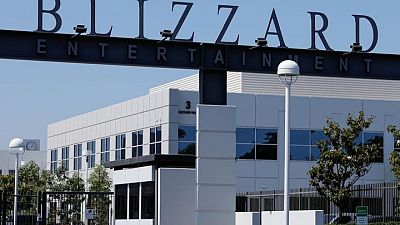 <div> <p> -Activision Blizzard said on Monday that the U.S. securities regulator was investigating the videogame publisher’s disclosures regarding employment matters and related issues.</p> <p>The U.S. Securities and Exchange Commission (<span class="caps">SEC</span>) has also issued subpoenas to the company and several of its current and former employees, seeking information regarding the matter, the owner of “Call of Duty” and “Candy Crush” franchises said in a statement.</p> <p>The investigation comes at a time when Activision is embroiled in a lawsuit that alleges equal pay violations, sex discrimination and sexual harassment at the company. (https://reut.rs/3ECUCeE)</p> <p>Shares of Santa Monica, California-based Activision were flat in trading after the bell. They closed down 4.2% after the <span class="caps">WSJ</span> first reported on the <span class="caps">SEC</span> probe.</p> <p>The regulator has also issued a subpoena to Activision’s Chief Executive Officer Bobby Kotick, the Journal reported, citing people familiar with the investigation and documents viewed by the newspaper. (https://on.wsj.com/2XCTG9m)</p> <p>The <span class="caps">SEC</span> declined to comment.</p> <p>California’s anti-discrimination agency has accused Activision of suppressing evidence of sexual harassment and bias against female workers, alleging that the firm allowed a “frat boy” culture in its workplace. (https://reut.rs/3hOn2Zi) </p> <p>The <span class="caps">SEC</span> has asked for documents including minutes from Activision’s board meetings since 2019, personnel files of six former employees as well as Kotick’s communications with other senior executives about sexual harassment or discrimination complaints by employees or contractors, the <span class="caps">WSJ</span> report added.</p> </div>