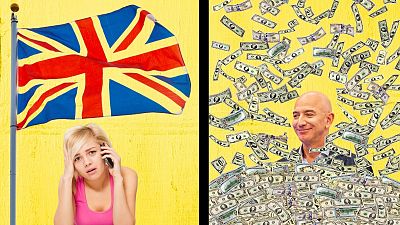 From 23 May 2022, customers who have taken out a new contract or upgraded with UK phone provider Three from 1 October 2021 will pay a charge of £2 (€2.34) per day when roaming within the European Union.

In 2017, free roaming charges were introduced for all EU citizens when travelling within the bloc. This meant that consumers could use the minutes, texts or data from their plan while they were abroad in Europe for no extra fee.

However, since January 2021 when the UK officially left the EU, British operators have been allowed to reintroduce roaming charges as the Brexit trade deal with the EU did not ban them.

Several telecommunication giants previously stated that they would not reintroduce the charges when Brexit happened, including Three. In a press release from 2019, the company explicitly said they would not do so.

“We’re committed to eradicating excessive roaming charges and will retain this great customer benefit regardless of Brexit negotiations allowing our customers to continue using their usual allowances when they travel within the EU,” the former Three CEO Dave Dyson said at the time.

Now Three has become the third major company to do the opposite and bring the charges back, following in the footsteps of EE and Vodafone.

Australia’s highest court made a landmark ruling on Wednesday that media outlets are “publishers” of allegedly defamatory comments posted by third parties on their official Facebook pages.

The High Court dismissed an argument by some of Australia’s largest media organisations — Fairfax Media Publications, Nationwide News and Australian News Channel — that for people to be publishers, they must be aware of the defamatory content and intend to convey it.

The court found in a 5-2 majority decision that by facilitating and encouraging the comments, the companies had participated in their communication.

The decision opens the media organisations to be sued for defamation by former juvenile detainee Dylan Voller.

Voller wants to sue the television broadcaster and newspaper publishers over comments on the Facebook pages of The Sydney Morning Herald, The Australian, Centralian Advocate, Sky News Australia and The Bolt Report.

His defamation case launched in the New South Wales state Supreme Court in 2017 was put on hold while the separate question of whether the media companies were liable for Facebook users’ comments was decided.

The companies posted content on their pages about news stories that referred to Voller’s time in a Northern Territory juvenile detention centre.

News Corp Australia, which owns the two broadcast programs and two of the three newspapers targeted in the defamation case, called for the law to be changed.

The ruling was “significant for anyone who maintains a public social media page by finding they can be liable for comments posted by others on that page even when they are unaware of those comments,” News Corp Australia executive chairman Michael Miller said in a statement.

“This highlights the need for urgent legislative reform and I call on Australia’s attorneys general to address this anomaly and bring Australian law into line with comparable western democracies,” Miller added.

Voller's lawyers welcomed the ruling for its wider implications for publishers.

“This is a historic step forward in achieving justice for Dylan and also in protecting individuals, especially those who are in a vulnerable position, from being the subject of unmitigated social media mob attacks,” a lawyers' statement said.

Courts have previously ruled that people can be held liable for the continued publication of defamatory statements on platforms they control, such as notice boards, only after they became aware of the comments.

Amazon has offered to pay the full university tuition for hourly workers as competition to hire and retain them gets fierce, the company announced on Thursday.

Other American companies, including Walmart and Target, have recently started to pay for college or boost their existing programs. The job market is tight in the country, and employers have been offering all kinds of incentives and perks to snag hourly workers, including raising pay and offering bonuses.

The US Department of Labour estimates that there are currently 10.9 million job openings at the moment, which far exceeds the number of people available to fill them.

Amazon said more than 750,000 US hourly workers are eligible, including those who pack and ship online orders at its warehouses. The programme will launch in January 2022.

The company does not have the best reputation when it comes to working conditions. Last month it was accused by the United States National Labour Relations Board of threatening staff who wanted to join a union and there have been reports of poor working conditions in its warehouses.

Researchers have completed a comprehensive online map of the world’s coral reefs by using more than two million satellite images from across the globe.

The Allen Coral Atlas, named after late Microsoft co-founder Paul Allen, will act as a reference for reef conservation, marine planning and coral science as researchers try to save these fragile ecosystems that are being lost to climate change.

The group announced completion of the atlas on Wednesday and said it is the first global, high-resolution map of its kind. It gives users the ability to see detailed information about local reefs, including different types of submarine structure like sand, rocks, seagrass and, of course, coral.

The maps, which include areas up to 15 metres deep, are being used to inform policy decisions about marine protected areas, spatial planning for infrastructure such as docks and seawalls and upcoming coral restoration projects.

“Our biggest contribution in this achievement is that we have a uniform mapping of the entire coral reef biome,” Greg Asner, managing director of the Atlas and director of Arizona State University's Center for Global Discovery and Conservation told AP.

Asner said they relied on a network of hundreds of field contributors who gave them local information about reefs so that they could programme their satellites and software to focus on the right areas.

Asner said about three quarters of the world's reefs had not previously been mapped in this kind of in-depth way, and many not at all.

The University of Queensland in Australia used artificial intelligence technology and local reference data to generate the layers on the atlas. Anyone can view the maps for free online.