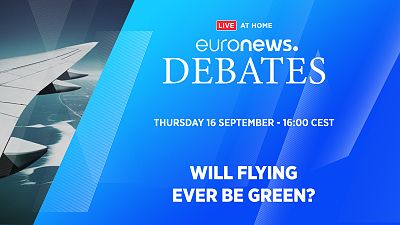 The airline industry is bouncing back from the havoc of the pandemic - but how will it succeed in its carbon emission reduction goals?   -   Copyright  Francois Mori/AP   -
By Euronews  •  Updated: 16/09/2021

The aviation industry is facing inescapable change as it comes out the other side of the coronavirus pandemic, which decimated its business.

Like other industries that are major carbon emitters, to achieve the overarching goals of the Paris Climate Agreement, aviation will have to do its bit.

But how to achieve its emission reductions goals in the years to come is a matter of debate - and Euronews put those questions to a panel of industry experts on Thursday, September 16.

Watch the full debate in the video player above.

Environment ‘number one on the agenda’

"I would say it’s probably number one on the agenda," said Willie Walsh, the Director General of International Air Transport Association (IATA), of the environmental issue.

In fact, since the pandemic, he says if anything it has increased in relevance, a very different picture to what happened after the financial crisis in the late 2010s.

He says at a recent meeting with 10 airline CEOs, the issue of how to make flying greener was top of the agenda.

So, the airlines claim to be on board with the work that needs to be done to severely reduce carbon emissions in aviation. But how did our panel of experts think this could actually be achieved?

"There’s no silver bullet to decarbonising aviation," said Filip Cornelis, Director for Aviation, European Commission. But, there is a "growing consensus, that sustainable aviation fuels (SAFs) is the way to go, particularly in the short to medium term".

These biofuels, which can come from plants or waste, could make a "major contribution" and real investment and support would "yield significant first results by 2030, but mostly by 2050" according to Airlines For Europe (A4E), the largest EU airline association.

Current uptake of SAFs is extremely low, however.

"We have a chicken and egg situation," said Cornelis.

Here Willie Walsh disagreed - especially with a suggestion that airlines should be obliged to buy it when its price is so high.

"People can’t buy it because we don’t have enough production," he said.

"Putting an obligation on airlines to buy it is not the right way to look at it, we should be putting an obligation on the fuel companies to produce it. There is a desire on the part of airlines to move in this direction, cost is a significant factor, but we have airlines investing in production of biofuels because fuel companies haven’t been producing it".

There has been a failure so far in this area, principally led by fuel companies, who have failed to invest in SAFs despite the apparent willingness of the airline industry to use them, Walsh argued.

Are there any short term solutions?

While the fight over who should take responsibility for boosting the use of SAFs goes on, Edward Arkwright, Deputy CEO of Groupe Aéroports de Paris (ADP), pointed to a potential short term solution for cutting emissions - improving navigation.

By improving the use of space and the way aircrafts take off and land, we could "reduce emissions of CO2 by 15 percent in the coming years" he said.

On landing it sounds simple: “When you land, you land step by step, each time you do this step you need to launch the motors and spend fuel. If you put all the aircraft on the same trajectory, and come in closer to the ground with a simple, regular, low approach, you don’t need extra consumption of fuel.

Also reducing waiting time on the runway could help, and could surely be doable right now.

But these apparent quick fixes aren’t actually so easy. They would need a lot of investment, across the industry, and crucially, a political route forward would be needed to standardise these practices across different countries.

One of the longer-term bets is on the use of hydrogen-powered aircraft. Cornelis said the European Commission will be putting around €2 billion into these new aircraft, the money coming from the European Research Budget.

And, industry is putting "the same amount or more onto the table, which makes us quite confident that they believe this can be done, and that there is a market behind it".

But one of the first bumps in the road here is that hydrogen fuel is energy-intensive to produce. The idea could work "provided it is produced by a green source," said Walsh.

The second challenge, he added, is that using hydrogen fuel would require a "radical redesign of the aircraft," due to differences in how it is stored onboard.

"It will be a considerable time before we get to long-haul wide-body aircraft being powered by hydrogen," said.

Do we even need to keep flying?

One question posed to our panel that saw them find common ground, was whether rail could replace a significant amount of flying to cut carbon emissions.

The resounding answer, unsurprisingly, was "no".

"People think if you stop short-haul flying it’s going to make a big difference, but it’s not," argued Walsh.

"Most of the CO2 is produced by long haul flights that can’t be replaced by high-speed rail (HSR)." He added that flights around Europe of less than 500km account for 24.1 percent of flights on the continent - and they generate 3.8 per cent of CO2.

While 3.8 per cent of CO2 emissions is not insignificant, HSR has obvious limitations, including large distances, but also obstacles such as water, mountains, and political borders.

The EU is heavily promoting HSR, said Cornelis, "which is already well developed in some member states like France, Spain, and Italy, but not elsewhere, and cross borders are very weak".

"Clearly it is a complimentary transport to aviation," he concluded.

Wrapping up the debate, Arkwright said crucial decisions will have to be made in the next few years about investing in hydrogen, ready for the coming decades. He also said that while we speak a lot about CO2, "don't forget the very, very low footprint of aviation on biodiversity, which will be the huge challenge of our world".

With these working in parallel, "even younger generations" will feel it is acceptable to keep flying. And he warned that passengers "will not tolerate a lack of progress within aviation sector itself".

Willie Walsh ended his argument back on the issue of SAFs.

You can watch the whole debate again in the video player at the top of this article.