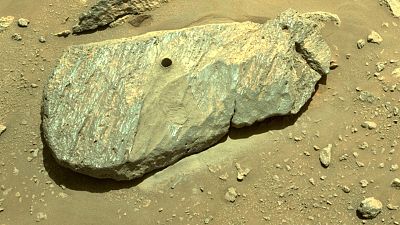 It's the first rock sample collected on another planet with the intention of bringing it back to Earth.

“Getting the first sample under our belt is a huge milestone,” said Perseverance project scientist Ken Farley of Caltech.

“When we get these samples back on Earth, they are going to tell us a great deal about some of the earliest chapters in the evolution of Mars”.

The robot collects a finger sized sample of rock using a drill and then stores it in an airtight cylindrical titanium tube. While this may sound straightforward, it isn’t.

It’s official: I’ve now captured, sealed, and stored the first core sample ever drilled on another planet, in a quest to return samples to Earth. It’s the first in a one-of-a-kind Martian rock collection. #SamplingMars

In August, there was a failed attempt to collect a sample.

Before the tube is sealed with the sample, the Rover takes a photo of the contents. During last month’s attempt, NASA scientists realised after the drilling and collection stages, the tube was actually empty. The rock was crushed into a powder when being picked up after extraction.

Despite the hiccup, the team were encouraged and this time around they have been successful.

Could there be life on Mars?

Along with identifying and collecting samples of rock and regolith (broken rock and dust), Perseverance’s mission includes studying the Jezero region, a crater on Mars that is believed to have once been flooded with water.

It is hoped that this will help scientists to understand whether there could have been life on Mars, as well as to characterise the past climate.

“For all of NASA science, this is truly a historic moment,” said Thomas Zurbuchen, associate administrator for science at NASA’s headquarters in Washington.

“Just as the Apollo Moon missions demonstrated the enduring scientific value of returning samples from other worlds for analysis here on our planet, we will be doing the same with the samples Perseverance collects as part of our Mars Sample Return program.

“We expect jaw-dropping discoveries across a broad set of science areas, including exploration into the question of whether life once existed on Mars”.

The Perseverance Rover plans to collect more samples on its current trip and spacecraft will be sent to Mars to collect them in future NASA missions later in the decade.