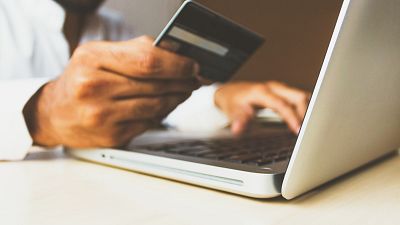 Taiwanese consumers are spending more money in Lithuania as a diplomatic spat with Beijing has seen the Baltic nation side with the East Asian island.

Data from Taiwan's National Credit Card Centre (NCCC) shows that residents of the island's seven largest cities carried out 112,000 transactions in Lithuania worth some €76 million between February and June this year.

This has catapulted the Baltic state into the top global 10 destinations for Taiwanese credit card spending, according to the island's United Daily News newspaper.

The biggest spenders were residents of Taipei, who splurged almost €32 million on Lithuanian products, including chocolate, beer and biscuits, the paper said.

Lithuania's foreign ministry welcomed the news, telling Euronews Next that the two regions were linked by their democratic politics and market economies.

Wait, why is this happening?

In June, Lithuania's national broadcaster LRT said the rise in spending from Taiwan came about after the EU state donated 20,000 doses of the AstraZeneca COVID-19 vaccine.

Chocolate maker Rūta told the broadcaster it had experienced a ten-fold increase in orders from the Asian island after the AstraZeneca shipment was delivered, while a Lithuanian brewery also experienced a boost in overseas orders from Taiwan.

"It’s very nice that they reacted in such a friendly way – this is indeed unexpected for us," Marius Horbačauskas, general director of Lithuanian beer company Volfas Engelman, told LRT.

"We began exporting to Taiwan not so long ago. It has been going quite well despite the fact it is such a far away country, but this gesture is very nice," he said.

What's in a name?

Another factor that could explain Taiwanese consumers' sudden affinity for Lithuania is an ongoing diplomatic spat between Lithuania, Taiwan and China, the latter viewing the island as a rebellious, breakaway region which it says does not deserve official recognition by other countries.

However, in July, Lithuania allowed Taiwan to open a representative office in Vilnius bearing the name "Taiwan" rather than "Chinese Taipei" — a term often used in other countries in order not to offend Beijing.

The move resulted in China recalling its ambassador to Lithuania. Last week, Lithuania's ambassador to Beijing returned to Vilnius "for consultations," the country's foreign ministry said.

Lithuania's Ministry of Foreign Affairs told Euronews Next that the country was keen to pursue "closer economic, trade, cultural and academic relations" with Taiwan.

"Until recently, our trade was very limited, so it is encouraging to hear about greater interest in Taiwan for Lithuanian products," the ministry said.

"We have to look for more complementarities between our economies and help our businesses to discover each other’s potential. Of course, Lithuania and Taiwan being democratic societies and market economies is a beneficial factor that connects us even more".