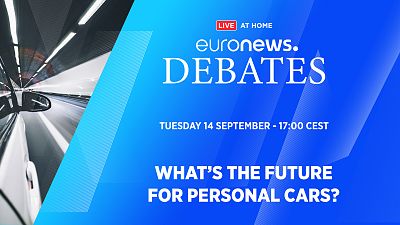 Winds of change are blowing on the automotive industry, a panel of top industry figures and policy-makers told Euronews on Tuesday, September 14 at 5 pm CEST at an interactive debate on the future of personal cars.

"What we see emerging after COVID is that people want greener cars, they want more flexibility, they want shared cars," said Clotilde Delbos, Deputy CEO and CFO at Renault Group. "There is a lot of appetite for something new."

Is it the end of personal cars?

Asked if the era of the personal car was coming to an end, Delbos said several trends questioned its preeminence. "Cars are more expensive in order to comply with regulation, in order to bring greener cars to the market," she noted. Meanwhile, she went on, cities are "making life more difficult for drivers" while offering a wide range of public transport options.

In contrast, the Renault executive said, "you don't have the same facilities in suburbs and rural areas, and in these places, there is nothing to replace the car at the moment."

"The younger generation has moved on to a larger degree from the car and moved much more towards sharing and a different type of mobility," said Ian Howells, Senior Vice President of Honda Europe as he discussed trends of the Japanese market. “As a company, we're heading much more towards mobility rather than necessarily just the car," he told the panel.

A Euronews poll conducted ahead of the debate found that almost 67% of respondents felt owning a personal car was still a necessity in today's world.

Discussions highlighted the importance of tailoring mobility solutions to the needs of different groups.

“We should address all the needs and they are quite different depending on where you are and who you're talking to,” said Delbos.

What are the challenges of electrification?

Europe leads the way in new electric vehicles sales with an annual growth rate of 60 per cent from 2016 to 2020 and a total market share of 10 per cent, according to Pew Research Center.

Electrification will get a further boost in the context of the European Union's ambitious climate plans.

The plan sets a target of reducing emissions from new cars by 55 per cent by 2030, compared to 2021 levels. It also requires that all vehicles sold from 2035 be zero emissions. While alternatives exist, including renewable fuels, electric cars are currently the main option available to fit the requirements.

Solis Perez said the European Parliament and the European Council had yet to work on the Commission's proposal, with a long legislative process still ahead.

"What is important for me to highlight is that we cannot see this ambitious package in an isolated manner," the lawmaker said. "It will imply the revision of many other legislations."

If we raise the ambition in the CO2 emission standards, we will have to review and establish binding targets for the deployment of charging infrastructure in member states

As demand for electric cars increases, the charging infrastructure in cities will require a drastic expansion. Even the Netherlands, which boasts the best charging points-to-cars ratio in Europe, merely has an average of 109 cars per charger, according to the German Association of the Automotive Industry.

"We have a target which has been set up in our strategy for sustainable and smart mobility, which is to have three million charging points by 2030," said Morgan Guillou, Legal Officer in the Unit for Automotive and Mobility Industries in the European Commission.

Guillou told the panel that 19 EU member states were using the bloc's pandemic recovery fund known as "Next Generation EU" to accelerate their investments in charging infrastructures.

“We have already 226,000 recharging points which are announced to be built with a timeframe which is accelerated thanks to this recovery package,” Guillou said.

But other guests questioned whether these efforts would be sufficient to meet the ambitious goal of ditching combustion engines by 2035.

We have a target that has been set up in our strategy for sustainable and smart mobility, which is to have three million charging points by 2030.

Morgan Guillou
Legal Officer in the Unit for Automotive and Mobility Industries in the European Commission.

“The question is, are these three million charging points enough to meet the target of getting rid of ICE cars by 2035?” wondered Solis Perez.

Howells cited estimates saying that the number of charging points would need to be double. “We're talking around six to seven million charging points, rather than the three that is currently being envisaged,” the Honda Europe executive said.

There is still work to be done in terms of a more complete infrastructure.

The automotive executive denied that electric cars were not recyclable.

“When I hear people saying 'I don't want to buy an electric car because you cannot recycle the battery,' it's not true,” said Delbos. “We do it already on a small scale because we don't have a lot of battery coming back despite 10 years of experience in EV. The number of batteries coming back is still very small, but we can recycle them up to 90-95%.”

Is the driverless car around the corner?

Autonomous driving is emerging as another trend of the future.

While many of today's cars are already equipped with sophisticated drivers' assistance systems, the panel discussed how soon Europe could see driverless vehicles ride its streets.

“I think from a technological point of view, it is doable and there's a lot of it today that's already out there, but there's a great number of things that still got to come together,” said Howells, citing the need for infrastructure, regulation and public acceptance.

“One thing we should not forget is the benefit to the customer,” said Delbos. “The normal citizen is not going to be able to pay for that in their normal car. So I think one of the most important areas for autonomous is mobility services, because there you can leverage the cost that you have to put in the car,” the Renault Group executive said.

Autonomy requires greater connectivity, including the ability for cars to receive information on traffic or weather and communicate with other vehicles or infrastructure providers. As a result, the automotive industry is increasingly moving away from conventional manufacturing to become high-tech players providing IT-based solutions.

Will the car of tomorrow be fun to drive?

According to our panellists, connectivity will be crucial in the car manufacturers' bid to differentiate themselves from their competitors as the industry goes electric.

We all say all cars are connected, yes but you have different types of connectivity. And the experience on board can be very different from one car to the next.

“It's not only about new technologies, but it's really about new experiences. And it's interesting to see the shift,” said Sandro Mesquita, Chief Executive Officer at Geneva International Motor Show (GIMS). “The art of the car, it's becoming the interior and not only the engine as it was before. So it’s bringing new ways of consumption annd I think it's also very interesting for the consumers,” Mesquita went on.

Delbos and Howells insisted that there was “pleasure” in driving electric cars too.

“It’s quiet, it's quick and (…) the drivability is great fun,” said Howells.