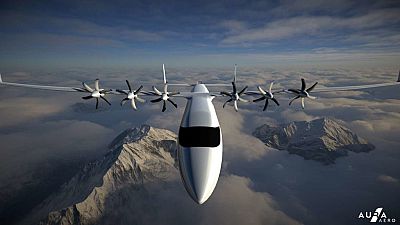 A French aviation start-up is setting its sights on becoming the "Tesla of the skies" with the development of two new electric-powered aircraft.

Aura Aero is developing a two-seater aircraft, set to come to market in 2023, as well as a more ambitious inter-regional passenger plane scheduled to be airborne commercially in 2027.

Toulouse - where the company is based - is already home to Airbus, the largest European aircraft manufacturer, and the nerve centre of the European aerospace industry.

It’s a legacy that Aura Aero hopes to build on as it develops new climate-friendly models.

"We are very respectful and very admiring of all the work that has been done by the pioneers, by our elders since the creation of aeronautics, which is in fact quite recent: it is barely more than a hundred years old," Jérémy Caussade, the Co-founder and chief engineer of Aura aero says.

"We are in a building which dates from 1935, which was the first French air base of the air force. And the idea is to draw on these roots to find solutions for tomorrow," he added.