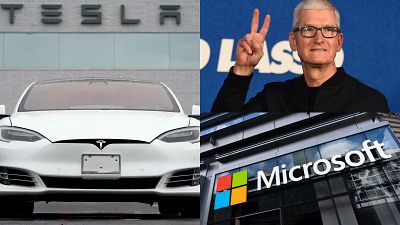 Who doesn't love receiving a bonus from work, but how would $750 million (€636 million) suit you?

That's the figure Apple CEO Tim Cook received in shares in the tech company to mark 10 years at its helm this week.

The award - which he struck in a deal with the company when it took over from founder Steve Jobs - was dependent on how Apple's shares faired compared to other firms on the S&P 500 stock index.

Since 2011 when Cook took over, Apple's share price had increased by 1,200 per cent, according to a filing Apple made to the US Securities and Exchange Commission (SEC).

Tesla's Autopilot came under increased scrutiny again this week after a vehicle using its partially automated driving system slammed into a Florida Highway Patrol cruiser on Saturday and narrowly missed its driver, who had pulled over to assist a disabled vehicle.

Earlier this month, the US government opened a formal investigation into Tesla's Autopilot driving system after a series of similar collisions with parked emergency vehicles.

Autopilot has frequently been misused by Tesla drivers, who have been caught driving drunk or even riding in the back seat while a car rolled down a California highway.

The electric vehicle maker uses a camera-based system, a lot of computing power, and sometimes radar to spot obstacles, determine what they are, and then decide what the vehicles should do. But researchers say it has had trouble with parked emergency vehicles and perpendicular trucks in its path.

Just this week, Tesla CEO Elon Musk tweeted saying he though the Autopilot software was "not great".

TikTok users will soon be able to buy things directly through the short videos on the app — something they had only been able to do through ads until now.

Canadian e-commerce company Shopify said Tuesday that businesses will be able to add a shopping tab to their TikTok profiles to create a “mini-storefront” that links directly to their online store for checkout.

The shopping tool, which is still being tested, is available to merchants in the US, the UK, and Canada, and will roll out to more regions in the coming months. Shopify already had a deal with TikTok that let merchants create "shoppable" video ads that drive customers to online stores.

ByteDance, the Beijing-based company that owns TikTok, already runs a thriving social media marketplace on Douyin, its twin video app for the Chinese market. Buying products through social media websites isn’t yet as common in the US, though Pinterest and Facebook-owned Instagram have made some inroads.

Reality star Kylie Jenner is among the first merchants to participate in the program by selling her skincare and cosmetics line through TikTok.

Microsoft says it has fixed a flaw in its cloud computing platform that cybersecurity researchers warned could have enabled hackers to take over a cloud-based database product used by many big companies.

There's no evidence the potential opening was exploited by malicious actors or that any customer data was exposed, the company said on Friday.

The cybersecurity firm Wiz, led by former Microsoft employees, said it discovered what it called an "unprecedented critical vulnerability" in Microsoft's Azure cloud platform and notified the tech giant earlier in August. Microsoft paid the firm a bounty for the discovery and said it immediately fixed the problem.

If exploited, the flaw could have affected "thousands of organizations, including numerous Fortune 500 companies," according to a blog post from Wiz, which is based in Israel and California.

Microsoft said on Friday the leak affected only a subset of customers using the product.