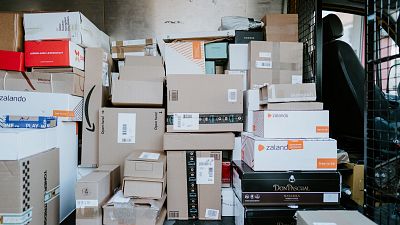 In a blog post the company said the robots were a "fast, reliable and relatively cheap" way to meet the huge demand for parcel delivery in China, the world's largest market for online shopping.

The "Xiaomanlv" or “small donkey” robots can deliver about 50 packages at a time and as many as 500 boxes in one day, covering 100 kilometres on a single charge, the company said.

Alibaba claims its robots will overcome the "problem" of last-mile shipping - the part where a parcel actually arrives at your door - which it says is plagued by the issue of delivery people getting lost or stuck in traffic.

In a further dig at human delivery workers, the company said its robots would make deliveries "without deviations or smoke breaks".

To understand why Alibaba says autonomous robots are the future of parcel delivery, here are four charts that explain the situation in the company's home country, China.

1. The volume of parcels

Data from China's postal service shows that the number of parcels shipped in the country has increased by roughly nine times in the last eight years.

“We do not have enough labour to deliver so many packages to consumers … it's impossible without automated technologies. So, this is why Xiaomanlv is very important,” Wang Gang, head of Alibaba's Damo Autonomous Driving Lab said.

It's not just China. As the COVID-19 pandemic kept people at home last year, the world's top 13 countries shipped over 100 billion small parcels between them, according to the Pitney Bowes Shipping Index which tracks annual parcel shipping data.

2. The size of the Chinese market

While parcel shipping worldwide has grown in recent years, the graph above shows that the big players in e-commerce are head and shoulders above the rest.

In 2019, Chinese consumers received more parcels than all the other top ten countries combined.

A key factor here is that while China has the world's largest population, it also has a rapidly growing urban middle class. A 2019 census in the country found that just over 60 per cent of Chinese people live in cities.

Those city-dwellers are demanding, according to Wang.

“Nowadays, consumers have higher expectations such as delivery to their building so that they do not have to walk for miles to get their package,” he said.

3. Online shopping is big in China

A billion Chinese shopped online in 2019, roughly two-thirds of the country's population of 1.4 billion people.

A 2021 World Economic Forum report found that over 50 per cent of the world's online retail sales take place in China.

Not only that, e-commerce is growing more rapidly in China than anywhere else. That equates to a lot of parcels.

While China tops almost every online shopping chart in terms of sheer numbers, in relative terms the Nordic nation of Sweden is the world's internet retail king, with over 80 per cent of Swedes regularly shopping online.

Sweden and South Korea both perform well in global league tables for broadband penetration and internet speeds, which could be a factor in explaining why so many people in those countries shop online.

If Chinese e-commerce were to approach those levels, it could represent a major increase on current parcel delivery numbers in the country.

Could this be the real reason?

While the sheer volume of parcels moving around China could explain Alibaba's plans to roll out a fleet of autonomous delivery bots, there may be another explanation.

Estimates from industry, including from consultancy firm McKinsey, tend to show that last-mile delivery is the most expensive part of the entire shipping process, often making up over 50 per cent of the total cost of shipping an item, as a courier on a bike or in a van brings the item to your door.

For companies like Alibaba - or US retail giant Amazon - that delivery cost adds up fast when you take into account the sheer volume of parcels being shipped.

"As the cost of labour increases, technology becomes relatively more affordable, accelerating the transition to automation," a 2016 McKinsey report on automation in the delivery industry states.

Put simply: it's expensive to pay people to deliver parcels, and that makes robots seem like a better bet.

Plus, as Alibaba says, they don't smoke.