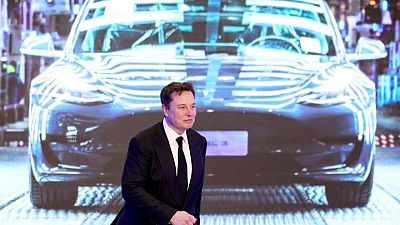 Elon Musk said on Monday that Tesla was working on improving the much-awaited update to its self-driving software "as fast as possible".

The electric carmaker's CEO said in a Tweet that the Full Self-Driving (FSD) Beta version 9.2 is "actually not great in my opinion, but Autopilot/AI team is rallying to improve as fast as possible".

"We're trying to have a single stack for both highway & city streets, but it requires massive NN (neural network) retraining".

Tesla's autonomous driving has recently been placed under investigation by the US National Highway Traffic Safety Administration (NHTSA) after a series of crashes involving Tesla cars and parked emergency services vehicles.

FSD Beta 9.2 is actually not great imo, but Autopilot/AI team is rallying to improve as fast as possible.

We’re trying to have a single stack for both highway & city streets, but it requires massive NN retraining.

The NHTSA said it had identified 11 crashes since 2018 in which Teslas on Autopilot, or Traffic Aware Cruise Control, hit vehicles at scenes where first responders were using flashing lights, flares, an illuminated arrow board, or cones warning of hazards.

Tesla has consistently warned drivers using the company's Autopilot and FSD features that they should be ready to take over at any time.

Drivers should "be prepared to act immediately, especially around blind corners, crossing intersections, and in narrow driving situations," the company said in a message to customers.

The growth of the autonomous vehicle sector has prompted increased scrutiny from regulators.

California laws "call for a two-way communication link that allows the manufacturer to continuously monitor the (driverless) vehicle’s location/status," the California Department of Motor Vehicles told the Reuters news agency.

"Just a few years back, remote human assistance was a dirty little secret in this space," said Elliot Katz, co-founder of Phantom Auto, a company that specialises in remotely operating vehicles.

"Virtually no one talked about it publicly because there was still this facade that these vehicles were just going to be able to drive autonomously, everywhere they need to go and do everything that a human driver would do".

"Everyone now knows that's not going to be the case," he told Reuters.