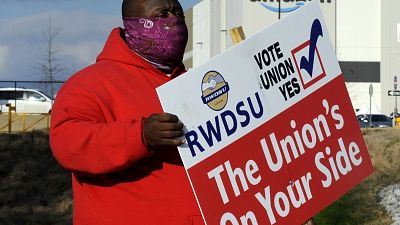 Amazon workers at a warehouse in the US who chose not to join a union in a vote earlier this year could take part in a second ballot after a preliminary decision by the United States National Labour Relations Board (NLRB) which recommended the vote be re-run.

Workers at the warehouse in Alabama rejected joining the Retail, Wholesale and Department Store Union (RWDSU) by 1,798 to 738 votes in April this year.

Amazon cheated, they got caught, and they are being held accountable

But the RWDSU alleged that Amazon had illegally interfered in the ballot by threatening staff who voted to unionise with reduced benefits.

The union also claimed Amazon had compromised the election's integrity via a ballot collection box it secured outside the warehouse, claims Amazon denies.

On Monday, an NLRB official assigned to the case appeared to agree with the RWDSU and issued a recommendation that a second ballot take place.

"Throughout the NLRB hearing, we heard compelling evidence how Amazon tried to illegally interfere with and intimidate workers as they sought to exercise their right to form a union. We support the hearing officer’s recommendation that the NLRB set aside the election results and direct a new election," RWDSU president Stuart Applebaum said in a statement.

"Amazon’s behaviour throughout the election process was despicable. Amazon cheated, they got caught, and they are being held accountable," he added.

Controversy over a ballot box placed in the car park of the warehouse was at the heart of the recommendation to throw out the April result.

At the end of the day, they voted overwhelmingly in favour of a direct connection with their managers and the company

During a May hearing that lasted three weeks, the RWDSU had argued Amazon improperly influenced voting by pressuring employees to place ballots in the box, while in view of warehouse security cameras, creating a perception of surveillance that US labour law forbids.

Amazon also improperly adorned a tent surrounding the mailbox with messaging related to its anti-union campaign, the RWDSU said.

Amazon said it planned to appeal the decision.

"Our employees had a chance to be heard during a noisy time when all types of voices were weighing into the national debate, and at the end of the day, they voted overwhelmingly in favour of a direct connection with their managers and the company," it said in a statement.

The recommendation made by the NLRB official is not legally binding. The parties involved in the dispute will likely have to wait several weeks for a final decision to be made by the NLRB's acting regional director.

These are the 10 'most ridiculous' excuses for underpaying UK workers