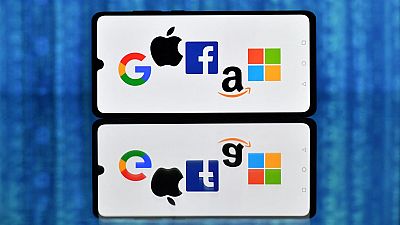 Computing giants Apple and Microsoft, as well as Google parent company Alphabet announced their highest-ever quarterly profits on Tuesday, continuing a run that has seen Big Tech benefit from the shift online brought about by the COVID-19 pandemic.

Microsoft posted the most profitable quarter in the company's 46-year history, with revenues rising 21 per cent to $46.2 billion (€39.13 billion).

Google parent Alphabet made a profit of $18.5 billion (€15.66 billion), as advertising revenue from Google rose nearly 70 per cent during the quarter ending June 30.

The results follow record earnings for electric carmaker Tesla, announced on Monday. Fellow tech giants Facebook and Amazon will make their own announcements on Wednesday and Thursday.

A decline in Microsoft's PC and gaming sales linked to the global chip shortage was more than made up for by growth in its cloud computing businesses, which have been boosted by the pandemic-driven shift to remote working.

Alphabet, too, benefited from the shift online. Advertising revenues from YouTube rose 83.7 per cent year-on-year, while Google's ad sales rose almost 70 per cent during the second quarter. Analysts said the growth in sales reflected the shift to online shopping, as the pandemic kept consumers at home.

"Alphabet has benefited from the general return of ad spend to the market and especially the balance of that return, which is more focused on digital channels than pre-pandemic," said Tom Johnson, chief digital officer at WPP Mindshare.

Consumer spending on home entertainment was a major factor in Apple's record profits, as revenue from the company's services business – which includes paid subscriptions for television and music as well as its App Store – hit a record high.

Apple executives warned that the pace of growth was not sustainable long-term, however.

"We expect still-significant growth in services but not to the level that we've seen in June," Apple Chief Financial Officer Luca Maestri told investors.

All three tech firms that announced their results on Tuesday were impacted by the global semiconductor shortage, which has impacted production of high-profile gadgets like Microsoft's Xbox Series X and S, and Apple's iPad.

Speaking to investors, Apple CEO Tim Cook said the chip shortage was likely to start impacting production of the iPhone as well.

"We do have some shortages where the demand has been so great and so beyond our own expectation that it's difficult to get the entire set of parts within the lead times that we try to get those," Cook said.

"Both were impacted by the significant supply constraints noted earlier in a good demand environment," she added.