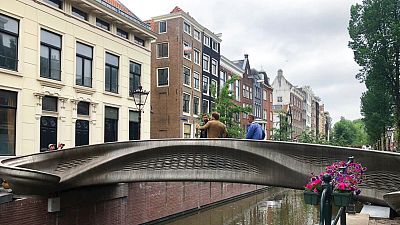 The world’s first 3D-printed steel footbridge has been unveiled in Amsterdam - and it's packed with cutting-edge sensors that measure in real-time how it handles pedestrian traffic.

It was installed over one of the oldest canals in the city's Red Light District and inaugurated by Dutch Queen Maxima on Thursday.

MX3D, the company that developed the technology, said the elaborate design of the bridge showcases the possibilities of robotic 3D printing in architecture.

"If you want to have a really highly decorated bridge or a really aesthetic bridge, suddenly it becomes a good option to print it, because it's not just about making things cheaper and more efficient," said Tim Geurtjens, who developed the MX3D technology.

"It's about giving architects and designers a new tool, a new very cool tool, in which they can rethink the design of their architecture and their designs.

The bridge doesn't simply look eye-catching, it's also built to be smart. It's packed with sensors that researchers at Imperial College London will use to monitor the state of the structure in real-time and track how it might change as it gets used by locals and tourists.

"That will help us to think about how people behave in the public space, but also how our bridges and our canals will wear down because of those people," said Amsterdam City councillor Micha Mos.

The data will enlighten architects and engineers around the world by answering questions about the long-term behaviour of 3D-printed steel and its potential use in future construction projects.

Local authorities are also hoping it will draw a new type of crowd to the city's Red Light District.

"We're looking at how to keep it liveable for the people who are here," said Mos. "This may attract a new kind of visitor, one who is more interested in architecture and design, which will help change the way the neighborhood is perceived".