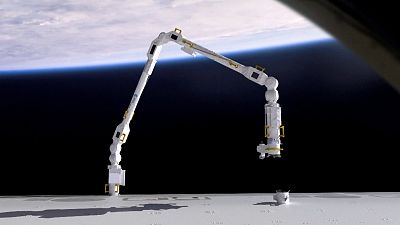 The Russian part of the International Space Station is preparing to deploy a new robotic arm fit with an elbow, shoulder and wrist.

Astronauts will use the European Robotic Arm (ERA) as a "third crew member" to transfer cargo directly to and from the Space Station, without the need for spacewalks.

Dutch astronaut André Kuipers knows how tricky a walk on the outside of the ISS can be.

"The spacewalks that some of the astronauts do are difficult, taking a lot of time, energy, oxygen, and there's some danger involved. So we want to avoid this kind of extracurricular activities if they're not needed, if they can be done by a robotic arm", he said.

At 11-metres long, the ERA can lift up to 8 tons and be operated with an accuracy of 5 millimetres.

It will also be able to move hand-over-hand within the Russian module.

One of its first jobs will be to fit radiators to the outside of the module.

"In your house, you use it (radiators) to warm up the house, but in space you put the radiator on the outside and the module uses it to get rid of its heat," says Philipe Schoonejans, the European Space Agency's ERA project manager.

Robotic arms are already in use at the Canadian and Japanese side of the ISS.