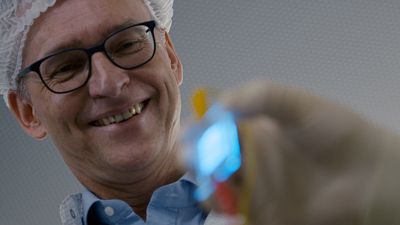 Without creative thinkers, our society and economy would stand still. The most innovative of these people have just been honored with a European Inventor Award from the European Patent Office (EPO).

These prestigious prizes are awarded to the most outstanding inventors or "pioneers in their field" as Luis Berenguer Giménez, the spokesperson for EPO describes them.

The European Inventor Award categories include Industry, Research, Non-EPO countries and SMEs. There’s also the prize for Lifetime achievement. This year’s winner of the latter is the German physicist, Karl Leo, whose invention is in almost every other smartphone.

The majority of Karl Leo's work has been dedicated to semiconductors, specifically organic semiconductors. These are made of carbon and can be transformed into powder or liquid. They shine when they are energised.

Leo tells us that "when it comes to organic semiconductors there are two principles: Either you energise them and create light for lightning or displays or you absorb light and create power thanks to the solar module".

The inventor improved the poor efficiency of organic semiconductors by adding very low amounts of other materials. This created a cocktail that finally improved their conductivity by a factor of one million.

Leo’s OLEDs improve energy efficiency, brightness and colour resolution enormously. This is why they're found in almost every other smartphone, tablet, flatscreen TV and in many solar modules.

But Leo's journey did not start with this amazing and revolutionary invention.

"I have always been very curious, even as a child I wanted to dismantle everything technical around me", he tells us. This is what led to his parents nicknaming him 'the technician'.

However, his more recent nickname is the 'Pope of Organic-Electronics'. The physicist, engineer, professor and successful entrepreneur earned this name through his innovations that have turned the electronic industry upside down.

The humble Leo is happy about his achievements, but says that "the most interesting things are those you haven’t understood yet".

From OLEDs to greener plastics to the protection of seabirds, the finalists of this year's European Inventor Awards are expected to help to advance society, increase economic growth and improve daily life.

The winners are chosen by an independent jury that is made up of leading experts in the fields of intellectual property, business, science, politics, media and research. The jury is chaired this year by Helen Lee.

Luis Berenguer Giménez tells us that these awards are so important because "inventors are devoting their lives to tackle the greatest challenges of our time with their ingenuity, with their creativity".

The EPO's awards are a way "to showcase their incredible work, the impact that innovation can have, and its ability to make the world smarter, safer and more sustainable".

You can watch the live ceremony for the winners at 19:00 CEST on the 17th of June.