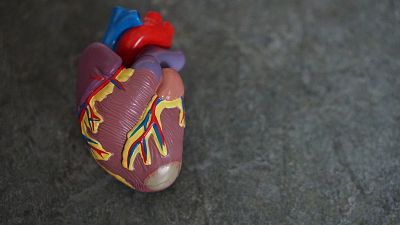 Doctors in Finland think the COVID-19 pandemic could be behind a sharp drop in heart attacks in the country last year.

Cardiologist Mika Laine noticed a roughly 30 per cent reduction in the number of patients suffering myocardial infarction – more commonly known as a heart attack – at Helsinki University Central Hospital in April and May 2020.

What was especially surprising was that similar figures were repeated elsewhere.

"When we started to study this further, we noticed that exactly the same phenomenon happened everywhere else in Finland and also in other countries in Europe and in the United States. So it was a kind of global phenomenon that happened during the COVID pandemic," he told Euronews.

Finland's public health body THL has launched a study to look at the phenomenon in greater detail.

What caused the drop?

According to Laine, the fall in heart attack patient numbers is the result of changes made following the outbreak of the COVID-19 pandemic.

"We have the exact same genes that we had a year ago, two years ago. So it has to be something in the environment that has changed," he said.

One big factor could be the rapid shift to remote working seen last March, as countries around the world locked down.

"People are at home, they are less stressed because they don't need to go through morning traffic, hurry to work and so forth," Laine added.

Data from the EU Science Hub research centre shows that even before the pandemic, more Finns regularly worked remotely than in almost any other European country.

Last May, EU labour research body Eurofound revealed that Finnish workers had moved to teleworking faster than any others in the EU, with nearly 60 per cent making the switch.

We also see this decrease in those people who are retired, who don't go to work, so it cannot be just because you're commuting.

However, Laine cautioned that other factors could also be behind the fall in heart attack patients.

Were there really fewer heart attacks in 2020?

"We know that many people stopped smoking because smoking was associated with severe COVID mortality," he said.

Improved air quality in towns and cities as a result of lockdowns may also have played a part, Laine said, as airborne particles are a known risk factor for heart disease.

Not everyone is convinced that the pandemic had a positive impact on patients with all types of heart conditions, however.

Research published in the Journal of the American College of Cardiology in January found that deaths due to ischemic heart disease – a narrowing of the arteries – and hypertensive diseases rose in some parts of the US during the early phase of the pandemic.

The American researchers also raised concerns that some patients may have died as a result of avoiding hospital treatment over fears of infection.

A passing trend or a major shift?

In the case of Finland, however, Laine believes that was not the case.

"We haven't seen any increase in mortality in cardiac diseases and so currently we think that it's a true decrease in the number of cases and not because patients are not seeking help," he said.

"People were not dying at home to myocardial infarction".

According to Laine, the number of heart attack patients in Finland remains about 5 per cent lower than average, even as COVID-19 restrictions have eased.

"I think this is a typical example that environmental factors can have profound effects on myocardial infarction. And I think it's motivating us to change our lifestyle healthier," Laine said.

‘Spermageddon’: Are we facing a male fertility crisis?