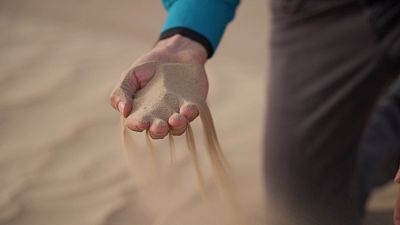 The capabilities of sand are being explored more than ever as desertification impacts the globe and Earth’s soil is converted into an infertile mix of dust and sand.

With 75 percent desert land, the UAE has survived such environments for millennia and unearthed its hidden benefits, which is attracting the attention of international scientists today.

Sand is already the second most used natural, and non-renewable, resource after water.

It is modified to make everyday products from simple glassware and cosmetics to high-tech solar panels, cell phone screens, and silicon microchips.

Its most popular use is in construction as the main component of concrete and mortar.

Up to 50 billion tonnes of construction aggregate, including sand and gravel, are extracted from the Earth each year according to the World Wildlife Fund in 2018.

This makes it the most mined material in the world — that the planet is quickly running out of.

The world spent about one billion Euros to import silica and quartz in 2019, and the UAE was the fourth-biggest importer after Canada, China, and Japan respectively.

Despite being a dune-covered country, sand grains lack the density and roughness to form building materials, which has scientists experimenting with technology and living organisms to convert the desert grains into solid bricks.

As the world faces a sand crisis with the fast depletion of construction-grade sand, industry scientists are getting creative with their solutions.

In 2018, one start-up founded by students at the Imperial College London declared that it was capable of engineering the fine grains of desert sand into solid bricks.

Better than concrete, it stated that their building component is more versatile in that it can be coloured, reshaped and reused, or be melted down into a biodegradable material.

Scientists at the University of Wollongong in Dubai are researching methods that use the functions of enzymes to solidify desert sand.

He added that this process creates an enzyme for urea hydrolysis, which with an added calcium source, can lead to ground-breaking results.

This process is too slow and costly to be practical according to Dr. Wilkinson, who says it can take nearly a day to create a single block with this method.

He’s researching more controllable enzymes from cheaper sources such as jack beans, soybeans, and watermelon seeds that can do the job in about half an hour.

He says there is no building that has been constructed using this method, but that one day these findings could provide solutions to problems light-years away.

“You can use the sand that’s available locally on that planet and harden it with the microorganisms,” Dr. Wilkinson said, citing Mars and the Moon as likely examples.

The EU spends tens of billions of Euros yearly to counter the dramatic loss of freshwater and crops according to the European Commission, as populations and consumption rises.

For nearly two decades, the International Center for Biosaline Agriculture (ICBA) in Dubai has been exploring how flora and fauna can survive in areas with low water and soil quality in unfavourable climates called ‘marginal environments’.

“We already have 1.7 billion people right now or more living in such environments, but with more places being converted and desertified more and more places will look like the UAE making, the work of ICBA more important for the rest of the world,” said Mai Shalaby, the institution’s curator of the Emirates Soil Museum.

The research centre is digging deep with their work to adapt marginal environments and make them capable of sustaining life.

One of its techniques involves enhancing the quantity of bacteria and fungi in desert sediments to create a stronger network of water and nutrients to feed plants.

It is also improving on a 2000-year-old practice of converting the region’s plentiful date palm waste into biochar.

This charcoal is produced by burning palm bio-residue into a dense nutrient conditioner for soil adding carbon, a critical element to develop sand into life-sustaining soil.

Climate-technology company ‘Desert Control’ is looking to speed up this process of making sand more hospitable for vegetation with liquid nano-clay or LNC.

It says their miracle mix can turn desert sand into seeding and planting ready fertile soil in about seven hours instead of seven years naturally over time.

This technology coats sand grains to create micropores and surface tension like a net that can prevent water and nutrients from seeping down and away from plant roots.

“We can convert half a hectare of Arabian land in one day,” said Dr. Orn Supaphol, a Lead Soil Scientist at Desert Control who demonstrated the quick application procedure on desert sand.

Currently, they have one LNC production unit with a capacity of 100,000 litres per day.

After fundraising nearly 20 million Euros to scale up, Desert Control plans to add two more units to their green fleet this year and expand in the UAE and to Saudi Arabia.

In time, their goal is to provide a solution for the entire world as water scarcity, populations, and desertification continue to rise.